iCivics in Dual Language Teaching: How to Utilize iCivics Resources to Engage English and Multilingual Learners

Five years ago, I was presented with the opportunity to begin a Dual Language Social Studies program at my middle school. I was honored and excited by the challenge, but I quickly became discouraged at the lack of materials in Spanish. I was able to find materials and textbooks from other Spanish-speaking countries to assist me in the classroom, since World History is taught in most countries. It was not until I began teaching Civics and U.S. History that I realized there was a severe lack of resources in Spanish for a Dual Language classroom.

While I searched for Spanish material specific to U.S. Government and History, I found iCivics had a plethora of materials for me to use! I began by using the interactive games iCivics created and translating some of the activities and articles I found  for the days I needed to teach in Spanish. Thanks to the iCivics English Learner (EL) supports, I was able to use their games and articles on my English days as well! 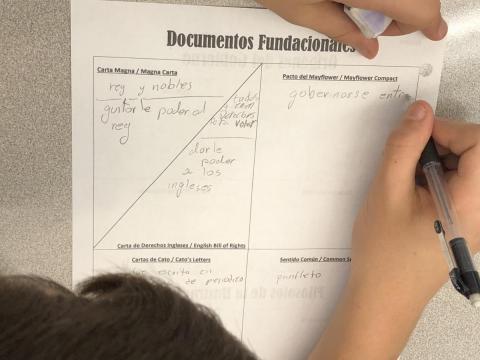 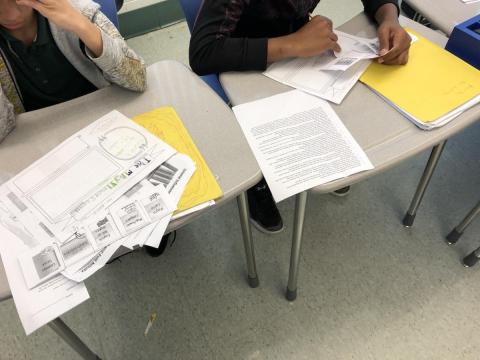 In a Dual Language classroom, the teacher is not only a content expert, but a language teacher. Half of my students had only been in the U.S. for a little over a year, and the other half merely months! I not only had to teach academic English, but civics to a large portion of students who had only experienced a dictatorship vs. democracy.

Then, in October of 2019, I was asked to teach civics to roughly 20 monolingual Spanish-speaking students who had just arrived in the U.S. Now, I do not have to tell you that test scores matter. Anyone in education knows this. So, when I received these students, I was about a month and a half into my curriculum and two and a half months from the semester exam. The iCivics lessons and my translations saved the day! When teaching a new language, the focus should be on five core domains: speaking, listening, reading, writing and culture. What was so amazing was how the iCivics lessons covered every domain as well as the three modes of communication (interpersonal, presentational, intrapersonal) in their activities!

Whether it was learning about Hobbes and Locke in Why Government? or participating in student activities like the foldables in Colonial Influences, my students began to develop a clear and purposeful understanding of how the government of the U.S. came to be. I also greatly appreciated how culturally relevant and sensitive the lessons were.

When learning about the different types of governments using Who Rules?, my students were fascinated to learn there were other countries with governments similar to the ones they left. The iCivics games were also helpful. After studying about the path to citizenship, I assigned the iCivics game, “¿Tengo Algún Derecho?” (Do I Have a Right?). Because the game was in Spanish, my students were able to play individually and with their parents; and I personally loved that my students and their parents began to develop a deep appreciation for the country that embraced them!

When the pandemic hit, everything changed. I had to find a new way to have my students interact with the text on their own. This is so difficult for an English Learner and their families. It is no secret that most students learn best from working together, but for an EL, this is crucial.

Thankfully, Kami and iCivics formed a partnership which allows student documents to be interactive and fun! One of their favorite lessons was the Civil Rights court cases before and after Jim Crow. It allowed them to see the “why” and “how” our laws are made. Though the iCivics lesson, Jim Crow, covers a lot of general information, my students loved learning about the individual court cases like Plessy v. Ferguson and Brown v. Board of Education. They could relate to the cases and the opinion of the court based on their own lives. The game “Guerra de Argumentos” (Argument Wars) allowed me to extend that knowledge of citizens’ civil rights and the Bill of Rights by having them interact with the information when we could not have discussions.

The fact that some of the iCivics games are in Spanish allowed me to reinforce the content in their native language and provided students with the opportunity to work with their parents in learning about our laws and government. Parent involvement in our country’s laws and government is so important to developing good citizens. The most important thing iCivics helped me do was to help prepare my students to be responsible and active future citizens of the U.S. 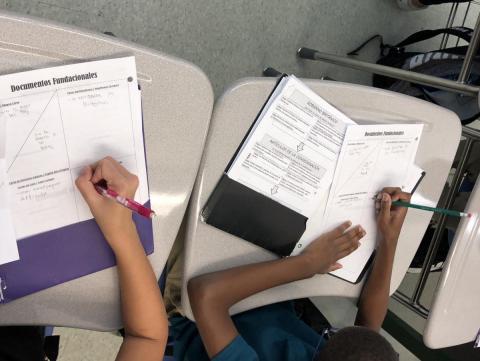 Veronica teaches Dual Language World History, Dual Language Civics, and Dual Language U.S. History at Pierce Middle School in Tampa, FL. She has been a member of the iCivics Educator Network since 2020. Follow her on Twitter at: @SraGomezDual.