Are Your Students #VoteReady? 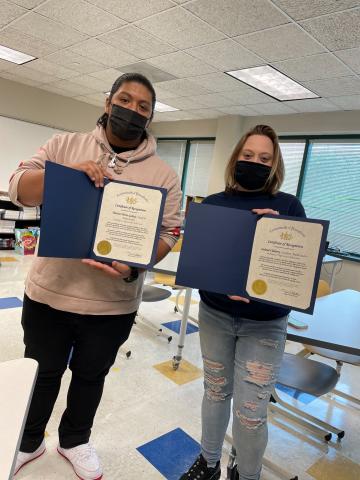 The U.S. Government class started the same way it has every semester for the past three years. Students faced the following question:

If/when you are eligible to do so, will you register to vote?

(And for those who do not meet the citizenship or residency requirements: Will you encourage those who can register to do so?)

And, as with every other time students have faced this question before we actually got into the curriculum, the answers were roughly the same:

“I don’t really care about politics.”

“I don’t know enough to figure out who to vote for.”

“Those people are all the same; it doesn’t matter if you vote.”

“Elections aren’t real—‘they’ already know who is going to win. The voting is just a show.”

“I’ve got to save my money for other things, I can’t pay to register to vote.”

“What difference does it make?”

“ I have to answer ALL those questions to register?”

I have heard these same responses from dozens of students. Our public high school in Allentown, PA, is relatively new, and has graduated only three classes of seniors so far. This year, I enter into preparing my fourth cohort of 17-18-year-olds to take their place in adult civic life in our community. As with past years, I will be faced with several sections each day of students promising me that I will not succeed in convincing them that voting should be in their toolbox of ways to have an impact on their future.

Allentown is a city of more than 121 million people. Set in the Lehigh Valley in southeastern Pennsylvania, Allentown is home to a population that is more than 68 percent BIPOC (Black, Indigenous, People of Color), most of whom belong to the city’s Hispanic/Latino majority. Around a quarter of the population lives below the poverty line, and almost a fifth of the population is foreign-born. These demographics are reflected in Allentown’s public school district, where 84 percent of the 16,000+ students are BIPOC, with almost 70 percent identifying as Hispanic/Latino. Additionally, 89 percent are from low-income families, and 100 percent qualify for free or reduced lunch.

We know that nationwide, communities of color and communities with high levels of poverty have the lowest rates of voter registration and voter turnout. Allentown is no different. While Pennsylvania as a whole has a higher-than-average rate of voter turnout (in 2020 approximately 71% of Pennsylvania’s eligible voters turned out to vote, compared to 68 percent nationally), and the Lehigh Valley rate was higher than both the statewide and national turnout rates (75% in 2016), voting rates across Allentown’s neighborhoods vary widely. Voter turnout in Allentown’s affluent and mostly White West End is more than three times the rate in Allentown’s Center City neighborhoods.

It is from these neighborhoods, where voting isn’t a tradition seen and practiced in most households, that my skeptical students come by their beliefs about voting. They often report never having seen someone vote, not knowing anyone who has ever voted, and sharing a general disbelief that the government represents or serves the people in their homes and neighborhoods. They look at candidates for office and do not see themselves.

My students are the perfect representation of research published in 2016 listing the most common reasons why people don’t vote.

Luckily, several of those obstacles to voting can be addressed within the civics classroom—and that’s where our classroom investigation of voting comes in.

Voting Starts in the Classroom

Voter registration drives are common sights in U.S. high schools. Often consisting of decorated tables in the school cafeteria, energetic student volunteers with clipboards at Back-to-School Nights, and colorful posters hanging on bulletin boards with directions to registration websites or stacks of paper registration forms, registering voters is the work of extracurricular clubs and outside organizations partnering with volunteers within the schools. But in communities where the act of opting into formal participation in the institutions of civic life isn’t a given, it isn’t enough to merely hang a poster and hand a student a form to fill out.

We show students what we value through what is given a place in the classroom. In our school building, this has meant giving voting a place front-and-center in civics instruction.

The opening discussion around “will you be a voter?” is the launch of an eight-week investigation around the history of voting rights and voter suppression, trends in voter participation, analysis of access to government resources compared to voter turnout, and current proposed state and national legislation to either expand or restrict voting access. At the end of these eight weeks, students complete two culminating tasks—an argumentative research paper on methods needed to improve voter participation and a personal decision: will they register to vote or not?

The sequence of instruction is as follows: Before entering their senior year, students are immersed in a civics-focused social studies curriculum, where all instruction culminates in some form of civic action. The anchor of this curriculum is the iCivics’ Foundations of Government curriculum unit. Each year, students have grappled with their role as “We the People” and what it means to be responsible for self-governance under a republican democracy based upon popular sovereignty.

Over the course of the first half of their U.S. Government semester, students work through the following activities:

The Proof is in the Progress

Voter registration takes place three times a year in our high school: once in early fall for those eligible students who turn 18 before the November elections; again in mid-winter for those who turn 18 before the April Pennsylvania primaries; and a third time before graduation to support those who turn 18 after those dates. Students become ambassadors and reach out to peers who need support, and even bring home their newfound expertise in the registration process. Many parents, aunts, cousins, and neighbors have also been registered as part of student voter registration drives.

Has facilitating deep student investigation into voting and the consequences of low voter turnout had an impact on student belief in their ability to raise their voices through voting? Judge for yourself!

Remember where the students started off each semester? Overwhelmingly skeptical and disinterested in anything related to voting.

At the end of each semester? In 2020, our high school was one of 20 recognized nationwide by When We All Vote and MTV for excellence in new voter education and registration. What’s more, we have earned the Governor’s Civic Engagement Award all three years that we have had 18-year-olds as students—twice at the gold level.

This award recognizes Pennsylvania high schools for success in voter registration. Schools must register 65 percent of eligible students to earn the silver level or 85 percent for the gold level. (Only COVID prevented us from reaching Gold status last year).

One of my students from the Class of 2019 came to me as a student who believed that voting in Pennsylvania had nothing to do with her. Most of her family still lived in Puerto Rico, and she claimed that there was no reason for her to vote any place else. After a semester of learning, she had not only registered to vote, she was also one of three students who represented us in Harrisburg to accept our first award from the Governor.

What changed her thinking? That fall, her home community was devastated by Hurricane Maria. In the classroom, she learned that although Puerto Rico is part of the United States, and Puerto Ricans are U.S. citizens, the island has no votes in the Electoral College and, therefore, does not participate in general presidential elections. Her family, then, had not been able to vote for the President who would decide on relief and recovery efforts in Puerto Rico and could not vote him out if they were unhappy with his decisions. But this student realized that she could use her vote in Pennsylvania to speak for her island and her family. She is a perfect example of what can happen when we connect student learning to authentic experiences in students’ lives.

Shannon Salter is in her 10th year teaching high school social studies. She has worked under a National Science Foundation grant, published research in Social Education and The Science Teacher, and spoken at National Geographic, the National Council for the Social Studies, and several professional development sessions. Shannon is a member of the iCivics Educator Network, the National Geographic Educator Advisory Panel, the National Constitution Center Teacher Advisory Council, and is currently serving on the Educating for American Democracy Implementation Consortium. Her passion is creating opportunities for students to use the skills of civic action to take their learning in all subjects out of the classroom to make an impact on their community.

Through the iCivics Educator Network, the perspectives of teachers across the country contribute to the public conversation about civic education in the United States. Each contributor represents their own opinion. We welcome this diversity of perspectives.