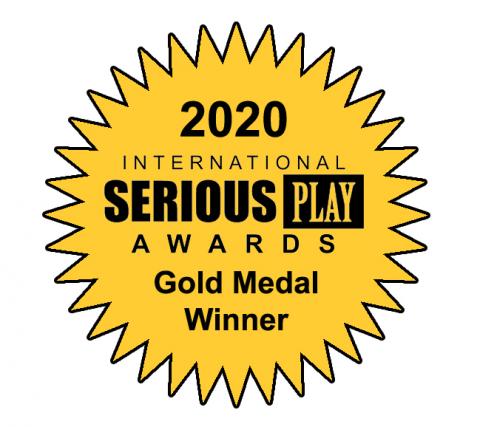 ORLANDO -- iCivics’ election game Win the White House was among seven K-12 games that were cited for excellence in the 2020 International Serious Play Awards Program, as it was awarded a Gold Medal in the Humanities category of the competition that judges educational games for how they help educators engage their students and inspire lifelong readers.

Win the White House, which was developed by iCivics in partnership with Filament Games, teaches students the fundamentals and the intricacies of what it takes to run for President of the United States by challenging students to run their own presidential campaigns. The game, which challenges players to not only choose and support a political platform, but to understand and utilize everything from polling to fundraising strategy was played more than 6 million times in the leadup to the 2016 election, and is one of iCivics’ most popular games.

Completely non-partisan, it has been updated for the 2020 election to reflect the issues that the country faces right now.

“It has been great to see Win the White House in the hands of students. They become deeply engaged in developing campaign strategy and have amazingly deep conversations about platform issues. Teaching the Electoral College can be dry, but Win the White House gets to the heart of the matter in a really fun way,” said iCivics’ Director of Digital Learning, Carrie Ray-Hill.

"Recognition from the International Serious Play Awards Program lends further evidence to the quality and impact of iCivics' games. We're proud to have helped create the newly-updated Win the White House, and we're honored to share this award with our longtime partners at iCivics,” said CEO of Filament Games, Dan White.

Along with awarding Win the White House the gold medal in the humanities section, Serious Play awarded two bronze medals to Baristasim, a game developed for people 16 and beyond studying business and Portrait of a Tyrant, a game created to help students engage with the Declaration of Independence. Serious Play also awarded three medals to games that were created to improve literacy. The gold went to Early Literacy Game, which teaches kindergarten, first and second grade students key literacy subskills. Silver medals went to Amplify Reading, a digital reading program for grades K-8, and to NexAgent by Circadence, an immersive network exploration game that places the student in the seat of an agent tasked with solving common network challenges. The Bronze Medal Award was given to Word Beach, a crossword puzzle game where players must solve puzzles using a Boggle-style circular letter bank.