There is an African proverb that says, “As long as you speak my name I shall live forever.” As a former U.S. History teacher, I purposefully spent a lot of time speaking the names of people who didn’t usually make it into the history books. I wanted my students to see diverse historical figures, but also see that regular, everyday people could make a difference. And I was pretty proud of my knowledge of lesser known figures…until I headed up iCivics’ Untold Stories project.

Our Untold Stories series consists of five short (2 minutes or less) animated videos designed to shed light on hidden heroes in the Civil Rights Movement. My task was to research their stories, write the script summaries, and work with the crew at Makematic, our video production company who pioneered the Untold project, to oversee the final products. Easy, I thought. But when I sat down to research, I was both humbled and pleasantly surprised.

With the exception of the NAACP’s Legal Defense Fund, I had never heard of the people I was researching. “How could this be?” I thought. I taught this material for 16 years! Dismayed, I pulled out my heavily annotated, dog-eared copy of Eyes on the Prize by Juan Williams. Surely, lawyer and federal judge Constance Baker Motley must be in here. She was, but only twice and only as part of a list of lawyers involved in NAACP cases. Hmm. The other names weren’t listed in my sundry resources either. So, I was off to the Internet.

There were online sources, but there were multiple discrepancies in the details. These Untold Stories really were untold. In my search for accuracy (or the best that I could get) I started digging deeper. I was soon horrified that I had taught civil rights for so long without knowing any of these people. How could I not know of Barbara Johns, a 16-year-old who led a student protest that ended up as a legal case and part of Brown v. Board of Education? My students would have loved that story! And J.D. and Ethel Shelley? Theirs is the stuff of Hollywood movies—risking everything to make a secret arrangement for a white woman to buy their house so they could circumvent a restrictive covenant. 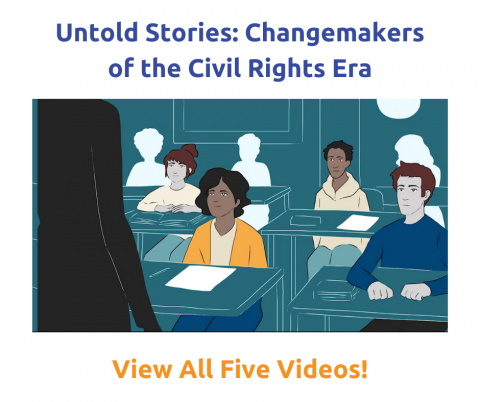 And then there’s the story of Autherine Lucy and Pollie Ann Myers. When I started researching it, most of the information was about Autherine. She was the first African American to actually attend classes at the University of Alabama. In the resources, Pollie Ann was mentioned nominally as the friend who applied with her, but was later dismissed by the university. I couldn’t even find visuals of Pollie Ann for the animators to use. Since scripts have to be short, Pollie Ann got limited mention there too. But when my supervisor reviewed the script, she made a note about Pollie Ann. She wrote, “Thank you for not writing her out of history.” And there it was. I almost did the exact same thing the history books had. It saddened me to realize how easy it would have been to erase her from history. With help from our Makematic producer, I was even able to contact the Myers family for more information about Pollie Ann and include it in the video’s Teacher’s Guide. As it turns out, it was actually Pollie Ann’s idea to challenge the University of Alabama’s segregation policy.

What I love about these videos is that they present the stories of ordinary people to whom students can relate. And because of that, the videos provide an opportunity for deep and meaningful class discussions about oppression, racism, and change. They can be used to demonstrate how protest and civic action are carefully planned, strategic events—not random, accidental moments. They can show that advocating for change involves risk, sacrifice, and sometimes, violence. And, in the case of Autherine and Pollie Ann, they can explore how laws or courtroom victories don't necessarily bring the social change they promise. Lastly, the topics covered in all of the videos can be easily tied to current events.

The videos and their accompanying Teacher’s Guides were a pure revelation to make. I hope they generate a renewed interest in the lesser known people behind the Civil Rights Movement. I hope they inspire passionate discussions about government, laws, and the power of people to create change in a democracy. But most of all, I hope they allow the names of these changemakers to be spoken, so that their spirits can live on forever.

Lora De Salvo is a Curriculum Associate at iCivics. She has 16 years of experience teaching U.S. history and U.S. government courses at the two-year college and high school levels. She has also worked as a training specialist with the Anti-Defamation League facilitating anti-bias and anti-bullying programs with middle and high school students.