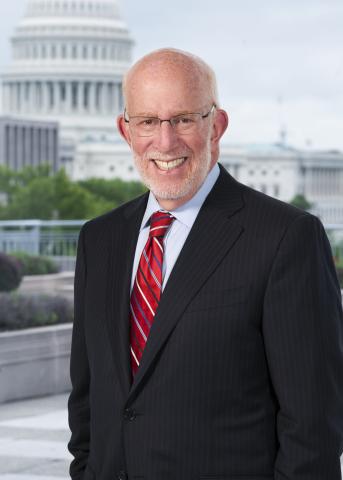 Ginsberg, co-chair of the Election Official Legal Defense Network, is a renowned political law advocate who served as national counsel to both the Bush-Cheney and Romney presidential campaigns.

A partner at Jones Day from 2014 to 2020, and Patton Boggs for 23 years prior, Ginsberg currently serves as a co-chair of the Election Official Legal Defense Network, which provides election officials—no matter their political affiliation or whether they work in a blue or red state or county—with needed advice and legal protection at no cost. He is the Volker Distinguished Visiting Fellow at Stanford’s Hoover Institution and a Lecturer in Law at Stanford Law School.

Known for its engaging games, iCivics has expanded its scope in recent years, embarking on an ambitious strategic plan to realize its vision of informed and civically engaged young people sustaining and strengthening constitutional democracy in the United States. iCivics continues to be the leading provider of K–12 civic education content, with hundreds of free, nonpartisan digital curricular resources benefiting more than half of the nation’s students in grades 4–12 every year. iCivics also supports excellence in civics and American history education through high-quality professional learning and its continued leadership as part of the Educating for American Democracy Implementation Consortium. And, through its leadership of the CivXNow Coalition of more than 270 organizations, iCivics also works to advance civic education as a national priority.

“There is nothing more important to our future strength as a nation than giving America’s students a sound education in civics and what makes our government work. I am pleased to be joining this vital organization as it fulfills this crucial mission,” Ginsberg said.

Ginsberg brings to the iCivics board an intense understanding of the conservative political landscape, along with a long track record of collaboration across the political spectrum. He has represented the campaigns and leadership PACs of numerous members of the Senate and House as well as national party committees, governors and state officials—and has represented four of the last six Republican presidential nominees, including the 2000 and 2004 Bush–Cheney campaigns and the 2008 and 2012 Romney campaign.

He served as counsel to the Republican Governors Association and as co-chair of the bipartisan Presidential Commission on Election Administration, which produced a much-lauded report on best practices and recommendations for state and local officials to make U.S. elections run better.

“As I have had the opportunity to get to know Ben during this process, I can’t think of a better and more thoughtful partner in our work,” iCivics Executive Director Louise Dubé said. “Not only does Ben fully embody the civic dispositions and skills of working across difference we strive to instill through civic education, but I was also impressed by his desire to dig deep into iCivics’ work and materials to ensure that they embody our commitment to nonpartisanship.before joining the board”

“It’s hard to think of anyone better suited to help iCivics advance its mission,” said Larry Kramer, Chair of the iCivics Board of Directors and President of the William and Flora Hewlett Foundation. “Ben’s life’s work has been deeply grounded in the values and practices of American democracy, and he is respected by people across the political spectrum for his judgment, integrity, and wisdom.”