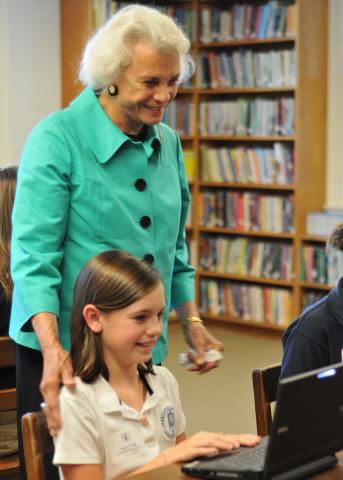 Today—Sept. 21, 2021— marks the 40th anniversary of the unanimous confirmation of Sandra Day O’Connor as the first female Associate Justice on the Supreme Court of the United States.

A new documentary just released by American Experience, “Sandra Day O’Connor: The First,” provides new insights into this pioneering woman, recounting a life that reflected and shaped an era. Justice O’Connor forged a legal career at a time when few women did, serving in all three branches of Arizona state government before becoming the first woman to serve on the Supreme Court, where she spent nearly 25 years before retiring in 2006.

Her public service didn’t end after retirement, however. Over the course of her career, Justice O’Connor had become increasingly concerned about the growing lack of understanding regarding the system of government in the United States and disengagement from civic life.

“I’ve seen first-hand how vital it is for all citizens to understand our Constitution and unique system of government, and participate actively in their communities,” she wrote in a 2018 public letter announcing her stepping back from public life. “I made a commitment to myself, my family, and my country that I would use whatever years I had left to advance civic learning and engagement.”

So, in 2009, Justice O’Connor founded iCivics to ensure all Americans have the knowledge and will to participate in our unique experiment in self-government by transforming civic education with innovative, truly engaging games and resources. Of all her accomplishments, Justice O’Connor considers iCivics to be her most important work and greatest legacy.

“There is no more important work than deepening young people’s engagement in our nation.” - Justice Sandra Day O’Connor

Since its founding, iCivics has grown and evolved rapidly, becoming the nation’s premier nonprofit civic education provider of high-quality, nonpartisan, engaging, and free resources to more than 7.6 million students annually. We are proud to be a successful, high-impact, and scalable resource solution, as well as the sector leader driving systemic change, with the capacity and strategic ambition to fulfill and sustain Justice O’Connor’s ambitious vision. Day in and day out, we are guided by her wisdom, humor, and determination—all of which are showcased in the documentary.

Sandra Day O’Connor’s commitment to civic education and @icivics made me so proud to do the work as a teacher. I feel lucky to have been in the same room as her, and spoken to her.

Her life inspires me.

Much has changed in our world since 1981, but the need for equitable, nonpartisan civic education may be even greater and more urgent today than when Justice O’Connor joined the highest court in the land. We are proud to continue fulfilling her most important work: to provide every student in the United States with high-quality civic education.