What the 2022 Midterm Elections Do and Don’t Tell Us

Voting is one moment in time. Civic engagement is the work that happens between elections—the choices we make and the work that we do every single day as part of this audacious experiment in democracy that is the United States of America. Civics is the preparation we all need for this work.

With the run-off in Georgia now complete, we now know the full results of the 2022 midterm elections. Perhaps the clearest throughline is that voters rejected extremist election deniers. I believe the results validate the American people’s commitment to sustaining our constitutional democracy. 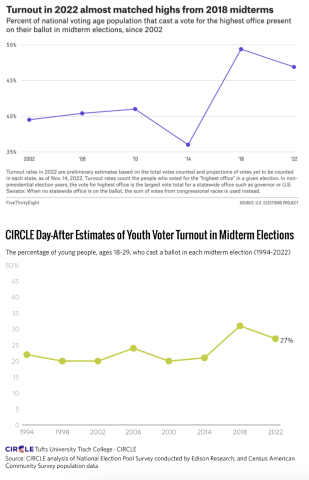 And it wasn’t just the candidates that were on the ballot, but key issues—whether explicitly or implicitly. All this led to high voter turnout across the board. Likewise, youth (18–29) turnout was 27 percent—second only for midterms in the last three decades to 2018.

It is perhaps significant that the aggregate youth turnout rose to 31 percent—higher than 2018’s record—in nine key states. In three of these—Florida, North Carolina, and Ohio—Republicans did well, while Democrats won notable victories in the remaining six. (And not only did the midterms see 18–29-year-olds vote, but even be on the ballot, themselves, with 25-year-old Maxwell Frost of Florida’s 10th district being elected the first Gen-Z member of Congress!)

According to exit polls, while 63 percent of the youth vote went to Democrats in House races, this is slightly down from 2018 and Republicans may be gaining ground with some young people in more local races. We need further analysis with data from actual voting to determine whether this holds true. What we do know is that youth prioritized and voted based on issues, and the issue that had the biggest impact on their vote was abortion.

What the analysis of the youth vote also tells us is that the college vote is a key subset. We know from the PACE Civic Language Perceptions Project that the widest gap in both the understanding and perception of civic terms manifest with respondents’ level of education and socioeconomic status. This is why the work of iCivics in reaching kids before this juncture—ensuring that everyone feels a part of this democracy no matter their educational attainment—is essential to sustain and strengthen our constitutional democracy.

We need members of our society to understand their rights and responsibilities, one of which is voting. How will we ensure that 2018 and 2022 are new trends in voter turnout and not anomalies? How can we increasingly ensure students receive the kind of civic education that pushes this key metric to at least be in line with the national average? In what ways can a more civically educated youth population spur greater engagement among the overall populace so midterms see voter turnout break 50 percent of eligible voters?

While the midterms mostly saw a rejection of extremism, our nation’s divisions are far from healed. First, it’s important to note that a “rejection of extremism” is not one-sided. Secondly, much of the analysis around this centers on swing states, while strongholds were further entrenched, underscoring the depth of our divides.

This voter behavior further validates iCivics’ approach to garnering a broad tent across difference to support investing in civic education. I wrote before the election of common ground across our divides I had the privilege of experiencing in my travels. And this only underscores recent polling that once again affirms strong support for civic education across party lines.

The key to a functioning healthy democracy is what happens between elections—the choices we make and the work that we do every single day as part of this audacious experiment in democracy that is the United States of America.

There is urgency to what happens between now and our nation’s 250th anniversary. What iCivics does during this time matters. There are some 17 million middle and high schoolers who will come of age in that time.

Democracy is not guaranteed—it depends on each of us engaging. With democracies around the world still under threat, it is more important than ever that we ensure that each and every child in this country develops the civic knowledge, skills, and dispositions to take up their part in this self-governing society.