Voting in France: no sticker, but so much joie de vivre 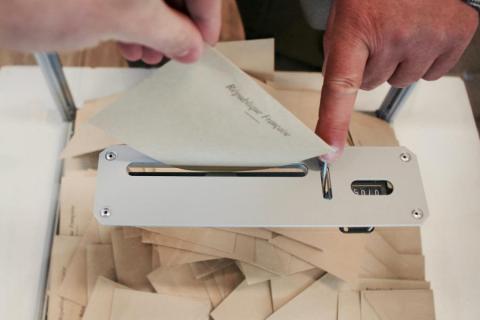 At iCivics, we encourage educators to look globally when teaching students about elections. Seeing how things are done differently elsewhere may provide insight into our systems. Today, we explore France – my home nation.

France just had two simultaneous elections in June: the régionales and départementales. Basically, these elections decided who would lead France’s 13 metropolitan regions and 101 sub-regions (départements). Think of them as voting for your state representatives.

Now if you somehow already knew about France’s local elections, then congratulations: you are more informed than most French citizens! Regrettably, only 30% of registered voters showed up to the voting booths for these elections.*

I should know – I was there all day.

A month prior, I chose to volunteer as a poll worker. I had never yet voted in person in metropolitan France. So I yearned, as any civics geek would, to see the machinations of an election up close.

The contrast with American elections was nothing short of stark. This election, carried out in much the same way as any other local election here (i.e. presidential, mayoral), can be summed up like so: highly bureaucratic, solemn, and deliberately transparent in its design.

I want to highlight just a few of the procedural differences I picked up on. They may be small in size, but these differences reflect big on how France values representative government and the right to vote.

Sometimes, it takes being elsewhere to ponder how things are done back home. I suspect that your own voting experience will differ from mine. Elections in America vary wildly, depending on the state. That, too, is by design.

iCivics makes teaching your students about U.S. elections easy. Our election resources include Cast Your Vote, an online game in which your students practice being an informed voter in a fictional local election, the State of Election Laws Infographic, which highlights the diversity of laws throughout the country, and the Students Power Elections guide, which encourages students to research their local elections and ways to get involved in movements and ideas they are passionate about.

*The causes for the low turnout are abundant arguably a mix of the grueling toll of this pandemic on French society; a vast misunderstanding of what France’s regions/sub-regions actually do and their political importance in our daily lives; a larger sense of apathy and cynicism for our current political systems; oh, and it’s vacation here, too, which we French take all too seriously.

Curiously, I have yet to hear anyone address the state of French civic education as a plausible culprit for the low turnout. I went through it myself here in public school. Civics classes were rare (once a month) and thoroughly drab. I would have relished a French iCiviques.

Gabriel Neher has been a Grant Writer at iCivics since 2015. He oversees much of iCivics’ institutional fundraising, with a focus on foundation relationships. Gabriel graduated from Northeastern University in 2015 with a degree in psychology and criminal justice. He is a dual national of both the United States and France, where he now lives.