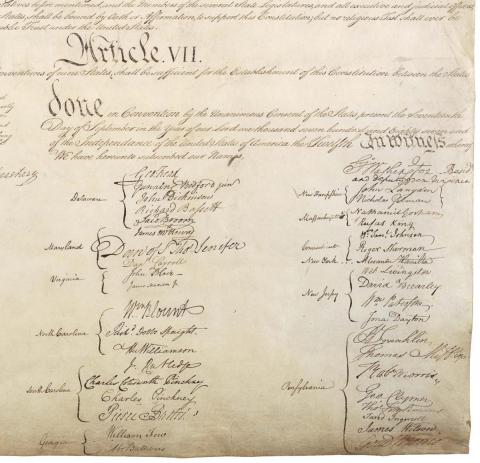 As a constitutionalist I think that every day is Constitution Day so when Congress mandated that we all celebrate the Constitution on one specific day I thought it was ridiculous, how can they minimize the importance of the Constitution to just one day a year? Then I thought I should be able to leverage this.  For young people (or adults) who are unaware, maybe this is a door for them. So making September 17 THE day that we highlight the importance of the Unites States Constitution gives me a platform to articulate why it is important every day. For students it is an opportunity to create enthusiasm.

I think tone is important and the Preamble set the tone for the entire document. It describes what the framers believed was the common good and the responsibilities of government. It is the statement that unites us as a people and a country. Although there is no legal mandate derived from that introductory paragraph, it is our social contract. The most important aspect of the preamble is contained in the first three words, We the People. The inference is that the government IS the people. It was unique to describe power as originating from the citizens and flowing upward to the government. It is a set of goals and aspirations to which we continually strive. It is clear from where we derive sovereignty.

So for Constitution Day, I suggested we celebrate by singing the Preamble. A few enthusiastically embraced it, most were willing but wary, and a couple thought it was not a good idea at all. The most amazing thing happened in the twenty minutes it took to film a very amateurish rendition. The kids bonded in a common cause. Some challenged themselves by singing out loud, all now can recite the Preamble from memory and they found out we have real musicians in this class of mega smart kids. But what happened later is the true brilliance of opening the door. The students became celebrities on campus. It was passed through social media. Adults not associated with school weighed in with their experiences and what they knew about the Constitution. I got a note from the Director of Secondary Education telling me “Madison would be proud”. Other teachers from other disciplines showed it to their classes. Teachers commented to the students about how fun it was to watch and now we have an entire campus engaged in talking about the Constitution. And today is not even “Constitution Day”!

Cheryl Cook-Kallio (@CookKallio), Madison Fellow CA 97, sits on the iCivics Teachers' Council and is a 37 year veteran teacher.  She teaches A.P. U.S. History and A.P. Governent/We the People at Irvington High School in Fremont, CA. Cheryl is also finishing her second term as a councilmember in Pleasanton CA.  Check out her class as they sing the Preamble: http://youtu.be/MSzIUP6nB_Y