Behind-the-Scenes with Filament Games: Creating a New Cast Your Vote 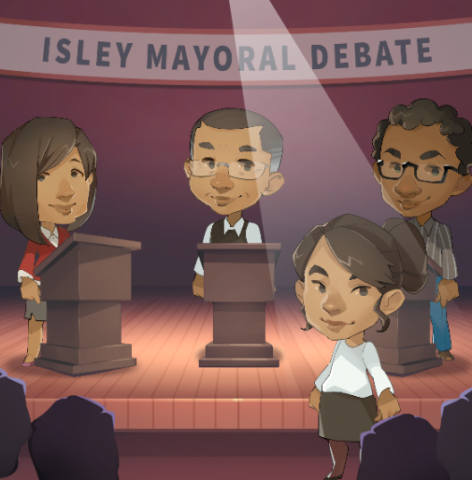 This interview was originally posted by Filament Games on October 21, 2019 and was authored by Filament's Marketing Coordinator, James LaPierre. Explore more posts like this one on Filament's Blog.

Filament Game Designer, Colin Skinner provided a behind-the-scenes look at the process of remastering our Cast Your Vote game. Check out his interview below for exclusive insights, then play the game at icivics.org/castyourvote.

Colin – start us off by telling us a bit about yourself and your role on Cast Your Vote.

Hey everyone! I’ve been making games with Filament and iCivics since early 2018. Cast Your Vote is the fourth title I’ve worked on. As the game designer on the project, I have three main responsibilities: ideation, communication, and documentation. First, I work closely with iCivics to come up with a strong concept for a game that satisfies our learning objectives and is fun to play. Then I create the visuals and language necessary to share my ideas with the other people working on the game, and together we develop a shared understanding of what we’re making. Finally, as we add features to the game, I record our expectations for how they should work and what should happen when. This helps to ensure we’re creating the experience we all envisioned and makes it easier to tell when something’s not working right.

Cast Your Vote is a newly updated version of an iCivics classic – give us a brief overview of the game and its learning objectives.

In the original game, you attend a town hall debate between two politicians, choose which questions to ask, and rate the candidates’ responses. Then you vote and find out how well the person you voted for aligns with your views. That’s it! It’s a small game that introduces the concept of voting for someone based on their positions on issues. Simple, yet effective.

What new features/improvements does the 2019 remake of Cast Your Vote bring to the table?

Our main goal for this remake was to paint a more comprehensive and realistic picture of the process of preparing to vote. While attending debates and focusing on the issues are both excellent ways to prepare, modern voters are equally likely to glean info from the news and social media. Also, new online tools are making it easier for curious citizens to conduct their own research into other aspects of candidates, such as their professional backgrounds and voting records.

In the new Cast Your Vote, you decide which sources to consult and what information is relevant to you. Notes you take are saved to a central Notes app where they are organized and summarized, making it easier to refer back to the information as you decide who to vote for. And what to vote for! The ballot now includes some timely referendum questions that you may need to research if you want to make an informed choice.

Was the team able to reuse any pieces of the original game in the remake? Or was this new version developed from the ground up using all-new art assets and code?

It was developed from the ground up! Content-wise, players might notice some overlap between the topics you could ask questions about in the original and the issues in this game. There are 17 issues in the remake, and each has its own icon to help you keep them straight. Aside from that though, everything is brand new for this game.

What was an interesting challenge that presented itself when designing the game?

It’s an educational game, so interesting challenges come with the territory! In the case of Cast Your Vote, the most interesting challenge was a fundamental one arising from the premise of making a game about voting. One of the defining characteristics of games is that the player’s performance varies based (at least in part) on their skill and the decisions they make throughout the experience. Whereas with voting, there’s superficially only one decision―who to vote for―and it doesn’t have a clear right or wrong answer. So it’s already an interesting topic to try to make a game about.

With this game, we wanted to stress the importance of showing up to the polls informed and having done your homework, regardless of who you vote for. So the player’s score mostly reflects how fully they engaged with the note-taking mechanic and how thorough they were. At the end, we highlight aspects of the candidates that the player may or may not have discovered, and the player can see how well the candidates aligned with them on the issues. But these features serve more to allow the player to reflect on their experience, rather than to assess their performance.

What aspects of the remake were most exciting to work on/improve/expand upon?

One neat feature in the remake is that the candidates are procedurally generated at the beginning of each game. So if you play multiple times, you might notice a character’s personality change―maybe their policies are a little different, or you learn something about them that you didn’t know before. That, plus the fact that there are 17 issues and 12 candidates to explore, means that there’s a ton of replayability for all the hardcore voting enthusiasts out there.

Speaking of the candidates, we were able to bring these characters to life in an unprecedented way for an iCivics game. We built 2D animation rigs for the characters so they could be more expressive when answering questions, and hired professional voice actors to record their dialogue. These improvements make the town hall portions of the game really engaging.

Did Filament collaborate with any subject matter experts at iCivics (or other organizations) when creating the game’s content?

Carrie Ray-Hill, Director of Digital Learning at iCivics, conceived an entire city called Isley to be the setting for Cast Your Vote. Isley is fictional but based on real cities like Milwaukee and others―you can read more about it in some of the support materials for this game. Carrie did a lot of research on important issues in local politics that informed the 17 issues you learn about in the game. She also wrote all the dialogue for the candidates, and a lot of other content besides. Carrie rocks!

Talk to us about your experiences playtesting the game with young learners. What were their initial reactions to the game? How did their feedback help influence our development efforts?

As soon as we had a fully playable version of the game, we took it to Cardinal Heights Middle School for a playtest. It went really well! It seemed like they enjoyed learning about the characters and deciding who to vote for. It was fun to hear their reactions to candidates they didn’t like: “Perkins is THE WORST,” I remember one girl saying. Another girl impressed me with how thoughtfully she considered the referendum on raising the minimum wage.

We also got a lot of useful feedback that helped us execute confidently on certain features. The most important thing we learned was that players needed a stronger call to action to take notes in the research app. Some of the kids also talked about a “clock function” to communicate how much time was left in the day, which inspired the phone battery mechanic. The playtest also underscored the need for a reminder to review your notes the night before the election.

Play the New Cast Your Vote!