Civics and citizenship took center stage at the National Council on the Social Studies Annual Conference this year in Seattle. The keynote event and major highlight of the conference was a citizenship and naturalization ceremony followed by a Q&A session with Justice Sandra Day O’Connor and Gerda Weissman Klein on the importance of citizenship. 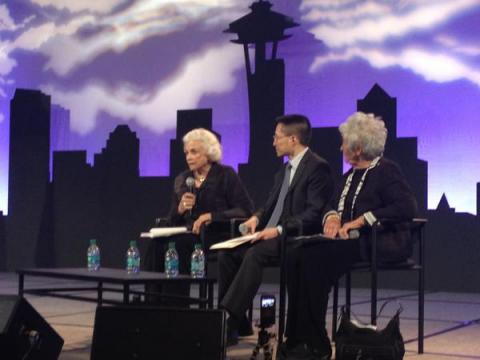 All of the new citizens are or were educators in their home countries—ranging from Turkey to Bosnia-Herzegovinia to Somalia—and there weren’t too many dry eyes in the house (including the event staff and stage managers) as these new Americans took their oath of citizenship.

After the swearing in, Justice O’Connor and Ms. Weissman Klein shared their stories and discussed the importance of civic knowledge and good citizenship in a Q&A session moderated by Eric Liu.

Ms. Klein shared her powerful story of surviving a concentration camp and the Death March at the end of World War II, and how hope and looking forward to each new dawn kept her going. She discussed the moment she became a citizen of the United States and how it is the most precious thing she has, and that we must all work to be good and active citizens.

Justice O’Connor stressed the need for more and better civic learning in our schools, sharing how her knowledge of civics helped her from her earliest days on an Arizona cattle ranch through her time on the Supreme Court of the United States. To be engaged citizens, we need to be informed citizens. In a lighter moment, one audience member issued something of a pop quiz, asking the justice if she had her pocket Constitution. She drew major woos and applause when, without missing a beat, she reached for her purse and immediately pulled out her copy and held it high.

The audience of social studies teachers from around the country left energized, moved, and inspired by these two great women, and the movement to reinvigorate civic learning and engaged citizenship continues to gather momentum in classrooms around the country.