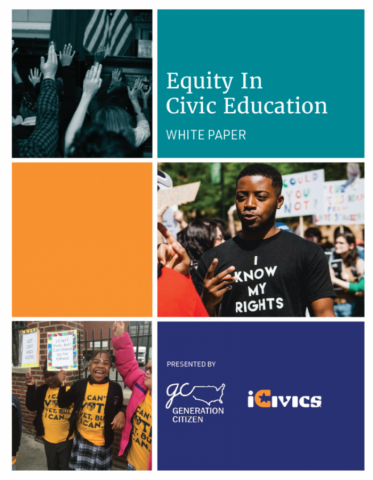 A team of 20 researchers, educators and civic education practitioners has released a white paper that outlines the challenges civic education has faced reaching youth of color. And it makes suggestions for how to make civic education more equitable and relevant for today’s increasingly diverse student population.

The paper is just one early step in the journey civic education organizations must make to elevate equity as a priority in their work. The Equity in Civic Education paper, which is available at bit.ly/EquityCivicEd was based on a year and a half-long effort to center equity in the civic education field.

The project, which was led by iCivics and Generation Citizen, with funding support from the William and Flora Hewlett Foundation, included forming a steering committee made up of a majority of people of color, conducting a listening tour across the country, investigating biases that the organizations themselves held, and led to this white paper. The project was designed to generate a movement that agrees on equity as its primary goal and develop concrete solutions and structures in education that will advance equity-related goals and young people’s roles.

“The need to strengthen equity in civics education is an urgent, moral imperative that requires all of us to roll up our sleeves. With a co-equal emphasis on culturally relevant teaching about our constitutional democracy, holding discussions on controversial issues, and digital literacy, on the one hand, and hands-on civics that builds on the lived experiences of all students, on the other, we can make civic learning the most exciting, impactful subject in our schools,” said Andrew Wilkes, Generation Citizen's Senior Director of Policy and Advocacy.

The paper describes civics as a school subject that has been neglected – and one that is at the center of a critical crossroads as the racial equity movement unfolds. The paper comes as millions of Americans reconsider their responsibility in combating systemic racism as part of a current resonating across the country.

Civic education has been undervalued. The Federal Government spends $50 per year per student on STEM education, while spending only five cents per year per student on civics. But rather than simply restoring civic education as a core subject area and transferring more resources to disadvantaged schools, civics must evolve so that it reflects a student body that is more racially and ethnically diverse than any previous generation, according to the paper.

Beyond teaching the structures and functions of government, the paper defines equitable civic education as one that is inclusive, representative, and relevant – and that promotes diverse voices and draws on students’ lived experiences and perspectives.

“For years now, students of color have received history and civics lessons that do not include them, their histories, and their lived experiences.” Steering Committee member Verneé Green, the Executive Director of Mikva Challenge Illinois, said. “When civic education centers government systems, processes and practices, but does not include discussion of the power of collective and individual action to bring about a more just democracy, we are leaving out the history and experiences of students of color throughout this country.  We can, and should, do better to make civics education truly a reflection of ‘We the people.’”

The goal of civics should include engaging students in understanding social issues, the power dynamics that cause them, and the power that young people have to bring change.

In essence, the paper states, civic education must grow by celebrating the triumphs of American history and recognizing the continual conflicts it has faced, so that it no longer tells a one-sided story of why young people should be engaged in American democracy.

In addition to regular steering committee and working group meetings, the group conducted an extensive review of literature in both civic education and pedagogy – as well as a listening tour with educators, civic education providers, school and community leaders, parents, and students in every part of the country, spanning both large urban districts and smaller, more rural ones.

We need to look at schools not just as a place to learn about civics, but re-shape schools as sites of community engagement themselves. Within that construct of making civic education a part of their campus ecosystem, schools should also incorporate several pedagogical practices that would transform how civics has traditionally been taught, so that it is responsive to our complicated socio-political climate.

The Steering Committee views this project as a significant, but preliminary step in a larger, continuous effort to center equity and elevate diverse voices in all conversations that occur in the field of civic education.

“This paper shows that we need not just more civic education, but a more robust civic education that is focused on both our complex political history and relevant community experiences,” said Jane Lo, a professor of Teacher Education at the College of Education at Michigan State University. “To do this work effectively requires the collaboration of policy makers, district leaders, school administrators, community members, and teachers.”