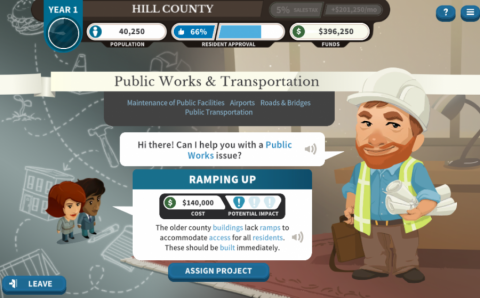 The game, Counties Work: Texas, simulates challenges that local county officials experience daily, from setting tax rates to fielding constituent requests. Players make decisions regarding the programs and services that impact residents and shape the community. Successful players get “re-elected” to their posts. The online game is free to everyone, and is expected to be incorporated into curricula across Texas.

“Texas Woman’s University is thrilled to partner with iCivics on this extraordinary project, which we believe will lead to robust classroom discussions and inspire deeper examinations into the challenges communities face,” said Mary Anne Alhadeff, executive director and chief officer of the institute, which led TWU’s effort in the game’s development. “We believe this game will significantly move the needle in demonstrating Texas students’ awareness of civics and will later help spur their engagement as productive citizens.”

Counties Work: Texas is the first of many games that iCivics plans to customize for individual states. Roughly 10,000 Texas teachers already incorporate iCivics games into their lesson plans, which reach nearly 600,000 students. The newly released national and Texas versions of the game offer improved accessibility for English-language learners and struggling native-English readers. Additionally, the new releases include a Spanish version of the game, an English voice over, and an embedded glossary.

Counties Work, iCivics’ national version of the game, has been played nearly 3 million times by students across the country since it was released in 2011. iCivics has created 20 games and hundreds of K-12 digital lesson plans that teach all facets of civic life, from how to run a presidential campaign to media literacy.

“The importance of local government has never been clearer than it is today, both as a way to solve some of the bigger issues that we face as a society, and as an important, and accessible conduit for young people to become engaged citizens,” said iCivics Board Chair, Wendy May, who also leads the Texas Civic Education Coalition. “We’ve designed Counties Work: Texas specifically for students of the Lone Star State and believe that it will be an important tool that teachers can use as we work to improve civic education around the state.”

About the Jane Nelson Institute for Women’s Leadership

The Jane Nelson Institute for Women’s Leadership is dedicated to preparing women to take on successful roles in business and public service. Through the institute’s three specialized centers—Center for Student Leadership, Center for Women Entrepreneurs and Center for Women in Politics & Public Policy—women get the education to establish careers as successful C-suite executives, the skills for building entrepreneurial businesses and the framework needed to run for public office.