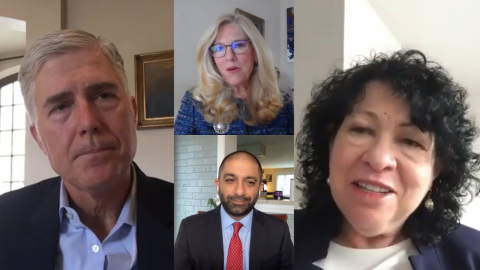 In a recent conversation with the Center for Strategic and International Studies (CSIS) and the National Security Institute (NSI), iCivics Board Member and U.S. Supreme Court Justice Sonia Sotomayor and fellow Justice Neil Gorsuch discussed the importance of civic education in building societal resilience. The ongoing pandemic, the spread of misinformation, and the increase in discord in American politics have caused growing concerns about the survival of the democratic republic.

“This is the scariest of times, and the most exciting of times,” Justice Sotomayor noted during the conversation. Heated partisan debates have revealed “cracks in our system”, but this on-going discourse has also engaged people in civics who otherwise have not been involved. To fix these divisions, both Sotomayor and Gorsuch agree, an investment in civic education is a national security imperative.

"[Civic education] is about engaging people in being active participants in change, with knowledge and with passion, without hatred. And I say that because too much of that conversation in our nation is centered on the negative and too little on the positive of what we share in common,” remarked Sotomayor.

Since 2015, Justice Sotomayor has been on the governing board of iCivics, where she helps guide iCivics educational content and acts as an ambassador for the advancement of civic education. She noted iCivics and the CivXNow coalition as two key resources working to improve civic education across the country in the interview.

Justice Sotomayor also cited a recent study that found 18% of Americans believe army rule of the country is a good thing. In order to recognize the threats to democracy, it is critical that Americans “know about our democracy and understand its importance,” she said, adding that in order to counteract against these threats to our national security, we must call for robust civics education. Justice Gorsuch agreed with Justice Sotomayor in that he’s “less concerned in some ways about foreign enemies,” and is more concerned about the loss of community and sense of shared liberty that allow America’s enemies to sow internal disagreement.

In the U.S., the federal government funds STEM education at a rate of $50 per student each year, while civics and history education only receives 5 cents per student each year. “I don’t know if the disparity should be that large or how much closer we should come to equalizing the two,” Justice Sotomayor said, “but the disparity given reports of how little our students know about civics should be a point of concern for everyone.”