iCivics featured in SXSWedu Panel on Games and Learning

On March 7, iCivics convened a panel discussion about games and learning at SXSWedu, the annual education-focused conference held as the precursor to the famous South by Southwest music, film, and tech conference that annually takes over Austin, Texas, each March. The panel, “What Kids Say About Games -- And Can We Listen?” featured iCivics Executive Director Louise Dubé, Asst. Professor of Educational Technology at the University of Northern Colorado Matthew Farber, and Steve Isaacs, a games design teacher at William Annin Middle School in Basking Ridge, NJ -- and was moderated by Games for Change President Susannah Pollack. 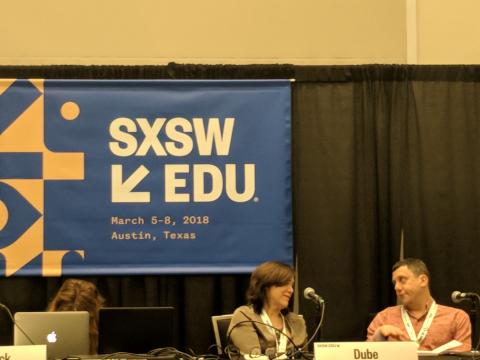 The panel used video reviews of games, such as iCivics’ Win the White House, that students from Mr. Isaac’s class had put together as a jumping off point to discuss what makes a great classroom game, and how designers can bridge the gap between what students want from games and what teachers need for those games to successfully teach topics such as civics. Specifically, the panel focused on how games can put students at the center of the classroom, help educators teach to standards -- and how they use games and student choice to accomplish their classroom goals. “That process of having students who don’t feel they have a voice, or have a voice in the classroom, find that voice through games is actually the point of civics class,” Dubé told the packed conference room. “In civic education, relevance is really the most important thing… If you can get a kid to actually care about our democracy you have won the game already.”

Those interested can listen to a full audio recording of the panel here on Soundcloud.