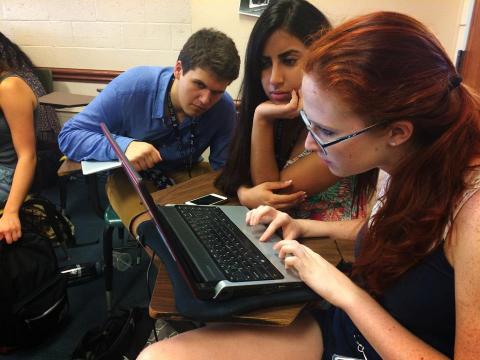 I think we can agree that this election was surprising on many levels.  I’ve been thinking about how our kids fared; particularly those first time voters, like my son Simon.  What do our youngest voters and active citizens think about government? How might we activate their knowledge to participate in an informed and meaningful way?  At iCivics, we pride ourselves with educating young people and preparing them to participate as informed and engaged citizen.  But, given the rapidly evolving landscape of the news media, we wrestle with what “informed” means right now.

An analysis from CIRCLE1 revealed that 24 million young people voted in the 2016 election. In its post-election analysis of the youth vote, CIRCLE noted that youth voters were an important factor in some of the key battleground states such as Michigan, Nevada and New Hampshire.  It is clear that New Hampshire and Michigan would not have been competitive for Clinton without the youth vote bloc.  What I find most reassuring is that early reports showed the youth vote increased somewhat above the 2012 election levels; however it continues to remain lower than the level of older voters.  We still have work to do.

iCivics was founded in 2009. Our first graduating class - assuming that most students encountered iCivics in 7th grade- voted for the first time in a national election this year. Research has shown that those who are exposed to engaging civic education are more likely to vote2.  We welcome the surge in youth voting but we acknowledge that voting alone is not the measure of success. Voting responsibly requires that young people get accurate information about the candidates and the issues.  In this election, that was not easy to do.

This election was a watershed moment for the media which struggled under accusations of bias, incorrectly reported support for both campaigns, and simply could not respond adequately to such a divisive campaign.  With such high levels of circulated misinformation, fact checking barely registered.

According to a recent Stanford University study of 7,804 students from middle school through college, some 82% of middle-schoolers couldn’t distinguish between an ad labeled “sponsored content” and a real news story on a website3.  Young people now consume their news through mobile and social media4, and schools are saddled with teaching kids about responsible consumption of the Facebook feed that is the “new” network news.  For every news item, students should ask: Is what I’m reading accurate, how can I tell?  Is this a credible, fact-based news source? Am I acting upon this information responsibly?

Engaging our next generations is teaching them to not only be engaged, but to be thoughtful consumers of political information through all media formats.  In the words of the proverb: "He who asks a question is a fool for five minutes; he who does not ask a question remains a fool forever".  It is our goal at iCivics to keep kids asking the right questions not only in middle and high school but for the rest of their lives.

Want more from iCivics about media literacy? Check out our Media and Influence Curriculum Unit.