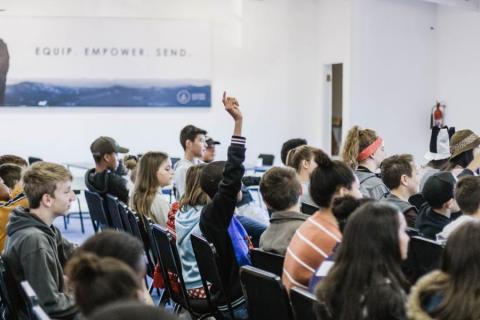 For the past four years or so, as a general rule, I’ve avoided current events that are still unfolding. It just feels like commenting on stories where the details are hazy and developing can call into question my objectivity. To say it another way, I really steer clear of breaking news unless kids specifically ask. Even then, I need to do my research to ensure I am providing balance and connection back to the content in such a way that supports my students where we are on our learning journey.

The week of September 23rd was seamlessly folded into a unit in which we had spent a ton of time discussing good governance, or governance that promotes virtuous living. We previously talked about Plato and Aristotle and settled in over the Federalist Papers for a meticulous deliberation. In my students’ AP Literature class, they read 1984 and On Tyranny. We tested on Constitutional Foundations, and then had time to do a deeper dive into what would be the impeachment inquiry.

Like everyone else, I scrambled to pull together a current events lesson rooted in what we already discussed in previous classes. So we went back to the Federalist debates. On Thursday, I pulled the IGIC whistleblower complaint cover letter around 11:00am from the Internet. I read it, I annotated it, and I pulled together a lesson. And I felt like I had left enough space for the story to develop, thus pre-empting my fear of politically-dangerous prognostication. So we talked predominantly structure. Students made great connections, asked compelling questions, and walked away with a better understanding of how our government is structured — the reasons why institutions were created as they were.

By 2:25pm, it all fell apart. The whistleblower document itself was available, and I had the surreal experience of spending about 30 minutes learning alongside my last class period. Now I know how reporters feel when they’re reading breaking news, live on the air.

Nonetheless, I felt really good about what transpired from an instructional perspective. There was a lot of learning taking place, both for me and my students. Indeed, most of the school day was spent educating myself right alongside them. This can feel unnerving when you can’t predict where the news is taking you, but sometimes unfolding and momentous events demand immediate attention. In this instance, it just felt like the right thing to do.

Interestingly, my students were frustrated by some of the structural realities. For example, they wondered why vice presidents can pardon presidents (iCivics resource alert).  It’s a fair question, so I helped make connections to the historical relationship between presidents and vice presidents — particularly before the 12th Amendment, which changed the way we elect both executive officers.

Students also expressed frustration around the lack of transparency of the potential transgressions that make it difficult to see illegality of actions clearly on all sides. I am sure more will arise as the story develops. It was quite a surreal week.

Here is a quick outline of the questions I asked my students to discuss and the materials used:

Are you #TeachingImpeaching? Head to Twitter and share your experiences in the classroom, helping to create a community of support and tools as educators across the country navigate this current event in the classroom.

Written By Jenifer Hitchcock
Jenifer teaches 12th grade AP Government at Thomas Jefferson High School for Science and Technology in Alexandria, Virginia. She has been a member of the iCivics Educator Network since 2017.