A Teacher’s 10 Year Journey with iCivics 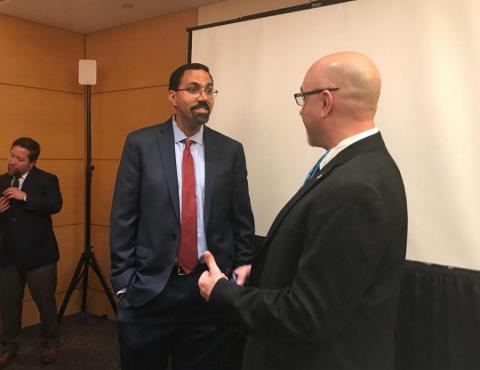 During my 15 years as a civics teacher, never has an 8th grade student walked into my classroom and proclaimed, “We’re learning about the legislative branch of government today? Alright!” For a super majority of my students, civic education is intrinsically boring. However, it doesn’t have to be. One of my most arduous challenges is making civics relevant, meaningful, and engaging – and hence, motivating students to learn about it. Thus, when Pennsylvania’s Social Studies Curriculum Advisor introduced me to the magic of Executive Command in the fall of 2010, I was mesmerized. Not only was I simulating the day-to-day tasks and responsibilities of the U.S. President – I was having fun! Although iCivics was in its infancy, it had already built a magnificent platform of game-based learning activities, and I could not wait to insert them into my curriculum.

Over the next four years, I became increasingly familiar with what iCivics had to offer; I incorporated their lessons and games within my class wherever I could, and was singing their praises to whomever would listen. I am constantly scouring the Internet for civic-learning materials, and a lot of what I find doesn’t measure up to my personal standards. With iCivics, I finally found a resource that not only met my standards, but exceeded them. Where else can my 8th grade students simulate the toils of campaigning for the presidency and ultimately wrangle with the day-to-day duties of the chief executive? In what other game-based learning platform can my students run a law office, navigating through clients’ breach of constitutional rights or make decisions as a legislator representing his or her constituents? How do you make learning about county government fun and engaging – iCivics’ Counties Work, that’s where! Of course, as a teacher, I encourage competition – Who can win the presidency first? Who can get the highest score? Many of my students play beyond the bell, sending me their scores from study hall or from their home. For a teacher, this is pure bliss!

I was such an initial fan of iCivics that imagine my excitement when I received an email inviting educators across the nation to apply to be a part of their Teacher’s Council (it’s since been renamed the Educator Network). I did not think I would be selected for this prestigious opportunity, but as Michael Scott from the Office once noted, “You miss one hundred percent of the shots you don’t take – Wayne Gretzky.” When I was selected, I had no clue how much it would transform my teaching career!

The first momentous opportunity came when we were invited to Washington, D.C. to meet with iCivics’ founder, Justice Sandra Day O’Connor. There I was: small-town, rural Pennsylvania teacher, having hors d’oeuvres and drinks, and exchanging words with Justice O’Connor in the actual U.S. Supreme Court building. During dinner, I sat a few seats away, and she shared with our group the story of when she received a phone call from President Reagan to be selected as the first female Supreme Court Justice.

Being part of the iCivics family has afforded me and my students some unique opportunities during the last five years. My students have been invited to speak on their civic education experiences at a variety of conferences and were even featured on ABC News’ Nightline during the 2016 presidential election. I was invited as a civic-ed representative to the Action Civics Summit in Philadelphia and to the Reagan Institute’s Summit on Education in Washington, D.C. It was my experience in Philadelphia which transformed my civics course. Prompted by a call to instill a sense of students’ civic identity, I created the first ever “Civic Action” project for our junior high. Since its inception, students have volunteered countless hours, collected thousands of dollars and goods for a variety of causes, and have contributed a multitude of man hours improving the community.  This all stemmed from my association with iCivics.

Through my years of involvement and witnessing the growth and expansion of iCivics, my excitement and enthusiasm for the products, the staff, and my fellow Educator Network members has not waned. iCivics continues to improve every facet of what they offer, and they listen to their teachers to make sure that what is created works for our students. The iCivics I fell in love with several years ago remains at the top of my list of highly effective curriculum providers, and I’m excited to see where the next ten years will take us.

Written By Joe Harmon
Joe teaches 7th-8th grade Social Studies in New Bethlehem, Pennsylvania. He has been a member of the iCivics Educator Network since 2014. Joe is pictured above with former U.S. Secretary of Education, John B. King.