Taking the Declaration in New Directions 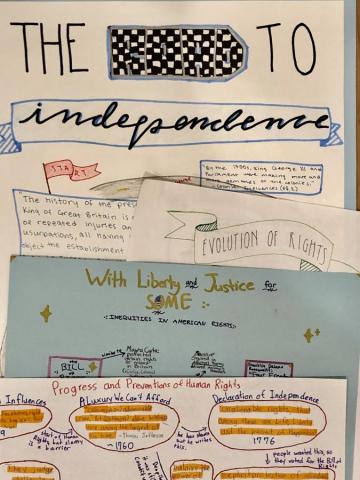 Every year, teaching the Declaration of Independence daunts me. The possibilities for modern and historical connections are vast, and I wonder if I could be doing more to cement the favorable concepts from this founding document into students’ minds.

Sometimes I’ll pair the Declaration, and later the Bill of Rights, with Franklin Roosevelt’s “Four Freedoms” speech from 1941, and Eleanor Roosevelt’s Declaration of Human Rights from 1948. My middle schoolers understand that, even though freedoms take different forms across historical eras, the desire for such rights, a fundamental underpinning of the Declaration of Independence, has persisted across the centuries.

This year, in addition to doing such layering of historical documents, I hoped that students would emerge from studying the Declaration with a true understanding of its parts. In previous years, we read the first several paragraphs and “translated” important sentences, but this seemed a little dull to me, especially with a particularly exuberant group of eighth graders.

Using the iCivics Hey, King: Get Off Our Backs! reading as a backdrop, I found two ways into the document that made information stick in ways it hadn’t in previous years.

The first was based on the iCivics lesson’s “Anticipate” step, which suggests “asking students if they like to make their own decisions. Ask students how they would feel if they knew that someone else (parents, guardians) would make decisions for the rest of their lives. Tell students they will be learning how Great Britain’s control got so out of hand that the American colonists finally decided to declare independence.”

We riffed on this prompt by sharing ways parents restrict their children’s lives. If you could complain about your parents’ rules, I asked, what would you be most likely to complain about? This 10-minute discussion also gave interesting insight into students’ habits at home. Some parents restrict screen time severely, others not so much; some parents are sticklers about bedtimes, while others don’t care.

The second way into the document felt like the step I had been missing for years. First, students wrote down the four parts of the Declaration: preamble, natural rights, grievances, and resolution of independence.

Then, on an iCivics Google slide (or on paper, if your school is not 1:1), students moved around eighteen paraphrases of important concepts from the document, such as “Our trade with the rest of the world has been cut off” and “When one group of people decides to separate from another, they should explain why.” This scramble activity lasted 10 to 15 minutes at most, but it was the perfect soft start to understanding this founding document’s structure.

During the next class, we listened to the annual NPR July 4 reading of the entire document (only 9 minutes!). As opposed to previous years, when I think students had simply been waiting, bored, for the reading audio to end, this year they offered insights beyond what I expected. They were impressed by how much one short document contained and astonished by how similar some of the complaints were to modern current events. The iCivics scramble the day before meant that they could now wrap their heads around the full document.

Whenever I can, I like to bring in non-textbook readings and other compelling sources, and during several “Declaration days” we also:

In addition, to my students’ delight, we listened to “Satisfied” from Hamilton: The Musical, which a number of them could recite by heart: “And when I meet Thomas Jefferson/ I’m ’a compel him to include women in the sequel!” When I’ve had time in previous years, we’ve also looked through Abigail Adams’ 1776 “Remember the Ladies” letter to her husband, John.

The energy that bubbled up from linking all these sources together – grounding by iCivics readings, prompts and activities – propelled us through a document that had previously felt like old-fashioned words on paper. Even better, this mini-unit’s ideas about natural rights and freedoms will carry over to just about every other topic we’ll cover in U.S. history and civics this year.

Sarah Cooper teaches eighth-grade U.S. history and is dean of studies at Flintridge Preparatory School in La Canada, California. She is the author of Making History Mine (Stenhouse 2009) and Creating Citizens: Teaching Civics and Current Events in the History Classroom (Routledge 2017). Sarah presents at conferences and writes for a variety of educational sites, including MiddleWeb, CivXNow and the Modern Civics Project. You can find all of Sarah's writing about teaching at sarahjcooper.com.