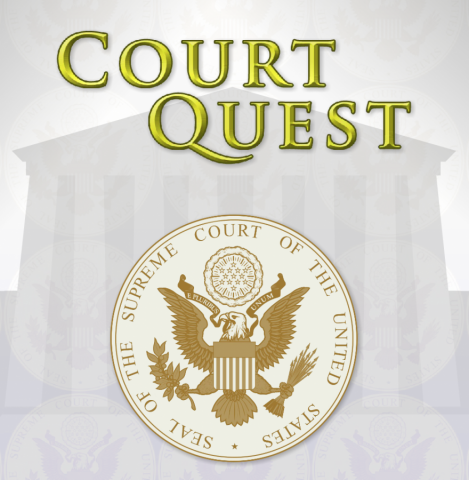 Nine years ago, I found iCivics on a whim. I had just created a new Criminal Justice course, taught mostly to Juniors and Seniors as an elective course in a large, urban, public high school. If you have ever been in this situation as a teacher, starting a new course with no set curriculum or textbook, it is equal parts exhilarating and terrifying. Each class period offers a blank page that demands at least the outlines of a sketch, if not also a coherent masterpiece in the making.

I’ll admit, long-term curriculum planning is not my strength. I’m more of a “What am I doing tomorrow or the next day?” kind of teacher. So one night, after getting my then 1-year-old to bed, I looked for an engaging way to start my unit on the court system. I had my objectives in mind: the United States has a Federal Court system along with State courts; the two central types of disputes in court are either Criminal or Civil; there is a standard progression for appeals (one that theoretically ends with the U.S. Supreme Court).  To my surprise, the perfect pedagogical tool already existed, and it was a game. I found Court Quest on a platform that I hadn’t heard of, iCivics. I had found my lesson plan for later that week (see, I wasn’t that much of a procrastinator...). I played the game, created a handout that asked students to describe some of those key ideas as they played, and then bought some candy, knowing that it always helps to incentivize a little healthy competition.

Since that first fateful evening, I have come to appreciate the multitude of iCivics’ offerings. Across my courses, students have played more than a dozen of their games, but the one that has always stuck with me is Court Quest. It’s still my favorite. Every semester, my Criminal Justice students play it as the intro to our unit on the court system. It does a fantastic job of teaching key concepts, like the difference between State and Federal courts and the progression of appeals, and it remains engaging and fun to play. Below are the main learning objectives of the game:

When I heard about iCivics revamping Court Quest, I was, as the kids say, “shook”...What would become of my favorite game?  Would it still meet my curricular needs?  Would the game characters I needed to help still have ridiculous problems? I got my first chance to see the new version when I was asked to have students play test the new game. By virtue of my location in Madison, Wisconsin (home of iCivics’ software developing partner Filament Games) my students often get the opportunity to see a game as it is being developed. (You can read more about this experience in this blog post). To my great relief, the core of Court Quest still remains, but in a more user-friendly and linear design. After playing, my students were in nearly unanimous agreement: the new version is better.

So what should you expect in the new version? Players still help people navigate through the court system - or systems. Students drive a bus through town and help characters find the correct court for their particular dispute. They must strategize about which stops to make and demonstrate an understanding about the progression of cases through the court system. All of the key concepts are still there.

My students reported that the two games were an equal challenge, but the new version made more sense. In the original version, students were often confused about how to direct the characters to the second and third levels of the court system and routinely found themselves with characters stranded on the map. The new version provides a more straightforward challenge - quite literally since you are driving on a road. If you neglect your passengers, they simply leave, often in an amusing huff.

I’m happy that Court Quest will remain part of my Criminal Justice (and AP Government) courses for a long time with the update. The new game still satisfies my pedagogical needs, teaches key concepts, and most importantly receives solid reviews from my students. I can also happily report that the 1-year-old I put to bed all those years ago is now a 5th grader, and one who has shared iCivics games in her classroom. I’m sure they will like the new Court Quest too.

Look for the official launch of a new Court Quest coming in early April!