Playtesting: A New Cast Your Vote is On The Way 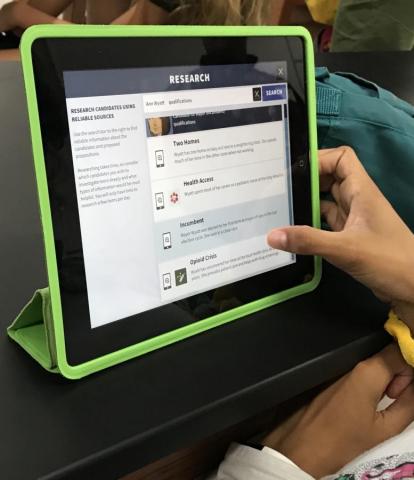 Before any of our games and digital tools are released as final products, we let real students in real classrooms experience them through playtesting. As soon as we get a playable build, we have the first playtest. The feedback from this exercise is critical in helping the game development team tweak and improve the final product.

Our Director of Digital Learning, Carrie Ray-Hill, most recently experienced a playtest for our game, Cast Your Vote, which is getting a redesign that will be released in October. In the upgrade, Cast Your Vote has been completely re-imagined and challenges players to be informed voters in new ways. Using the tools at their disposal, players will be able to research candidates and propositions for an upcoming municipal elections — to uncover where they stand on the issues. Through a series of town halls and voting apps, players develop a sense of civic duty to prepare to vote as they watch Election Day come into view.

Here is a recap of Carrie’s experience observing 8th and 9th grade students playtest the new Cast Your Vote:

We playtested Cast Your Vote in three classes: two classes of “Girls Empowered Through Technology”, each comprising 12 young women, and a third class, “Taking Tech to New Heights” with 16 students. Each class was about 75 minutes long, which was the perfect length for play followed by tons of very meaningful conversation.

With playtests, you never know what you’re going to get. Sometimes the game is not quite “baked” enough to provide a great experience for the students. Other times, students can be really shy and not as responsive to discussion or providing honest feedback. The iCivics digital team was really proud of where the game revision was in development because it was very strong, resulting in a great play experience for the students and valuable feedback for our team.

Here are a few fun comments heard from students during game play:

“Oh, this guy has no policy for this issue. RED FLAG.”

“EEEK, I only have 8 days until the election. I need to get busy.”

“Are there alternative candidates, I am not feeling this ballot.”

“You get to have your own opinion in this game. This is awesome.”

“I felt like an actual citizen in the game.”

At the conclusion of the playtest, we conducted a survey to get deeper with feedback. Here’s what a few students shared with us:

“I had more fun than I thought I would on a voting game, and they should use this in schools to teach us about voting and what to know about the candidates running for a role.”

When we asked students, "What should you know about a candidate before deciding to vote for them?", they shared:

“Who supports them, if they are a reliable source of trust, if they have any prior knowledge of being a mayor or candidate.”

Based on these responses, the learning objectives were clearly met during this playtest. When students were asked to prioritize which information is most important to know about a candidate, 87% of students responded that they chose people whose ideas aligned with their own. 42% percent of students chose people with the fewest “red flags” and 0% chose random people. Success!

Keep your eyes out for the launch of the newly designed Cast Your Vote in October. In the meantime, you can still play the original version.