Our mom, Sandra Day O'Connor, knew something about politics that America forgot 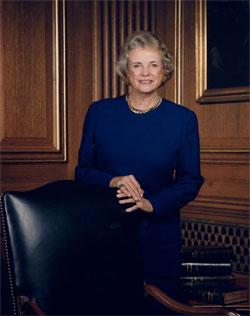 Opinion: Some of the most important work our mom, Sandra Day O'Connor, ever did occurred away from the Supreme Court spotlight, in homes and classrooms.

It’s been more than 40 years since our mother made history.

Sandra Day O’Connor became the first female associate justice in the nearly 200-year history of the Supreme Court. The 1981 Senate vote to confirm was 99-0, which seems unfathomable in today’s politically polarized times.

Twelve years later, in 1993, Mom welcomed the second female associate justice in the history of the high court when the Senate confirmed Ruth Bader Ginsburg, also by an impressive margin, 96-3.

This was Bipartisanship with a capital “B.”

And now, President Biden has signed legislation to erect statues of these two women legal pioneers somewhere on the U.S. Capitol grounds after unanimous consent in the Senate and an overwhelmingly bipartisan vote in the House.

The overwhelming support for the statues of these two women with very different backgrounds speaks to something missing from much of today’s politics: respect for the other. Disagreeing without being disagreeable. Understanding that the other point of view is not intended to ruin the country.