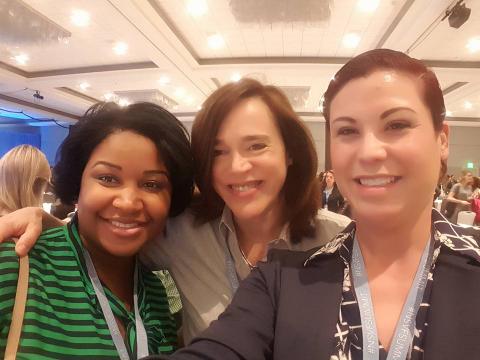 Imagine my excitement and pride when I received word that I had been invited to attend the New Schools Summit 2016 as a representative of iCivics.org! To be honest I knew very little about this gathering and in doing my research found that it is a plenary of mostly entrepreneurs, funders, policy-makers and basically “the people with the money” who don’t look like the students and schools “who need it the most.”

As a Latina who is a product of the NYC public school system now teaching in an urban, inner-city charter school in New England, I know first-hand the inequities that continue to plague most of our schools and communities--a glass ceiling and entire house for that matter that contains people of color from moving laterally or vertically along the spectrum of success.

New Schools vowed to push attendees to and beyond our comfort levels as they framed this year’s summit around race, equity and providing a high-quality education for EVERY child in this country. And push us they did.

I was pretty surprised at how openly conference leaders, such as New Summit CEO, Stacey Childress referred to herself and fellow funders as White people with money who need to take a step back and let our leaders of color do just that---LEAD.   After the pink elephant the room came into view and pranced around a bit, everyone breathed easier and the REAL conversations started.

Dr. Manuel Pastor, founding director of the Center for Justice, Tolerance, and Community at the University of California, Santa Cruz, directs the Program for Environmental and Regional Equity (PERE) at USC and its Center for the Study of Immigrant Integration. His presentation on the impact of racial and economic demographic patterns and changes was a real eye-opener for those of us apt to calling things “movements.” When it comes to equity in education, “it cannot be called a ‘movement’ until those most harmed by inequality are leading it.”

We were privy to a very intimate conversation with actor and activist Nate Parker, on reclaiming history, equitable teaching of that history, and pride in ALL history--especially the ones some districts feel they “have to teach” one month out of the year. It was wonderful to hear how his own “awakening” led him to become almost obsessed with Nat Turner, a Virginia slave who led the only effective and sustained rebellion in 1831 and is the focus of Parker’s film, “The Birth of a Nation” due to be released this October. “Don’t let anyone tell you this movie is about slavery. It’s not. It’s about liberation.”

And that was the kind of fresh, REAL talk that was heard and led discussions throughout-- with plenary sessions such as integrating schools, diversifying education leadership, the dilemma of school discipline, and so many real-time, everyday issues that we’re facing in education daily that I wanted to split myself in 2, sometimes 3 parts in order to attend so many of the great offerings!

There are so many ideas and perspectives I gained as a result of this summit, but for me, personally it is the realization that there are many more others out there, “like me,”-- women and men of color who have rappelled the tightrope and ascended the ladder of success despite the barriers we were either born into or which have been put in place by the status quo. We brush ourselves off after the daily fight in preparation for something better for our students. It’s more than just talking about it, we must DO something about it.

Soljane Martinez is a history teacher of grades 7-9 at Highlander Charter School in Providence, RI, where she has taught for the last 10 years.  In 2008 she was selected among thousands of teachers across the country as a Freedom Writer Teacher, a powerfully engaging curriculum based on the book and film of same name. She is also a recipient of the League of Women Voters, Susan B. Wilson Civics in Merit Award, for her teaching in civics.