Fighting For Our Future Citizens

"If men expect to be ignorant and free, they expect what never was and never will be."  Thomas Jefferson.  These immortal words by the inspired writer of the Declaration of Independence set the tone for civic involvement in the newly created United States of America.  And for many years, commitment to public service was practiced with zeal and sacrifice for the betterment of a society that had disconnected itself from the Old World to begin a new adventure in citizen participation. 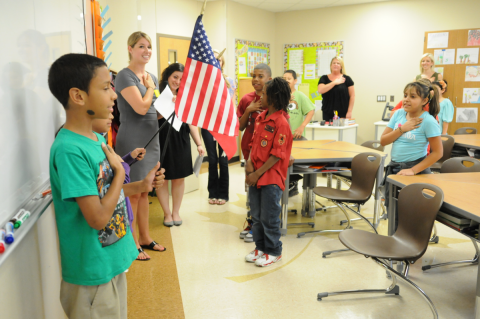 However, America's past decade has taken us further from that ideal of civic commitment.  As standardized testing in math, reading, and language arts became the norm of the 21st century, the social studies curriculum has been left by the wayside.  And as that train picked up speed and raced to the top of a mountain of multiple choice answers, the dust settled and educators clearly saw that the study of one's community, whether it be the neighborhood, the city, the state, the nation, or in fact, the world, was falling behind that fast moving engine.  What was left was a school day filled with important learning, but which left out civics instruction.  What used to be an integral required curriculum later turned into something optional, and now has often become something schools don't have time to discuss.

This tragic reality is illustrated in all aspects of American life today, including Americans reaction to any international or national event where they proclaim that the President of the U.S. needs to do something, with few acknowledging the role that Congress plays in policy making as outlined in the Constitution.  But this is only one area of civil society that is affected by a lack of constitutional knowledge.

Another instance outlining the lack of civic disposition in our society comes from the inability to deliberate in the national arena.  Congress's failure to work toward compromise or even discuss difficult topics and look for areas of agreement seems to have become the norm that many Americans use for speaking about political hot topics.  Viewers watch the news program that gives their viewpoint on an issue, and seldom want to hear what the other side is thinking or the rationale behind it.  This lack of trust or even lack of ability to debate controversial matters has trickled down into the classroom.  Many school schedules don't provide opportunities for students to consider where others stand  on a problem and because it isn't tested, teachers often find it difficult to work such instruction into a typical classroom day.

The answer to this problem lies in adopting a plan of action that includes a 3rd "C" to the recent education reforms of emphasis on college and career readiness.  Frankly, it doesn't matter how prepared young people are for their future, if that prospect does not include them being able to demonstrate the knowledge and skills necessary to live in a free society.

That is exactly what a flourishing, successful democracy demands of its citizens - participation!  Americans, in order to remain a thriving society do not need to exhibit the extraordinary passion that our founding fathers did, but they do need to understand the requirements of a civil society.  They cannot expect to be ignorant in the working of the greatest democracy in the world and keep it.   That would be expecting what never was and never will be.

Cindy Wilson teaches American Government and Politics at Capital High School in Boise, Idaho.  She is a 30 year classroom  teacher and currently serves on the Idaho Governor's Task Force on Education Reform.