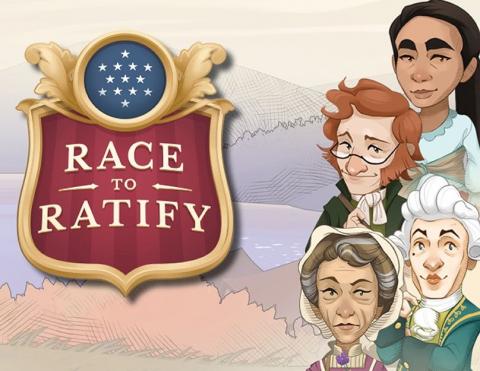 They say it takes a village to raise a child. It takes one to make a video game too. We are headed behind the scenes to see what (and who) was needed to create iCivics’ first ever historical video game: Race to Ratify as Constitution Day quickly approaches.

iCivics has had its eye on history, and more specifically on the ratification debate, for a few years. We knew teachers wanted something to help them cover the Federalist Papers and the Anti-Federalist response, and we knew that it was a perfect backdrop for an engaging game experience. We were lucky enough to get backing from the National Endowment for the Humanities to make just that! The grant application was a research paper in itself; we had to show that we knew enough about the subject to make the game, as well as create a stellar advisory panel of historians and game experts to help us along the way.

After the project kicked off, it took two main directions: game design and research. The game team started to design a great experience for the player. What kind of mechanics would both tell the story of this tumultuous period and pull the player in to the historical moment? How could they give the player agency, while still teaching a set amount of content? Much dry-erase marker ink was sacrificed in this effort. We decided to give the player the role of a pamphleteer, tasking them with traveling the 13 states in search of opinions on the Constitution. Then they’d be challenged to use those opinions as they wrote to persuade as a Federalist or Anti-Federalist.

With a strong direction for the game design, we could engage the research and content team. And that’s where Jennifer Rosenfeld enters our tale. She came to us from her post as a member of the adjunct faculty at George Mason University. After helping us situate the main issues of the ratification debate, she turned to the herculean task of researching all 23 characters in the game. They may be fictional, but they’re based on real people who were kind enough to leave us a thread to follow back to 1787. One of our goals in Race to Ratify was to include a diverse set of perspectives and to go well beyond the typical “wealthy white male” narrative.

We created a list of ideal and diverse character types (gender, ethnicity, location, class, vocation, etc.) and set Jennifer to find as many matches as possible. We’ve provided a full source list for the game and for each character! Here’s a quick Q&A with Jennifer on the process:

Q. How did you approach such a unique research project? What was the most challenging bit?

I began by looking at Pauline Maier’s recent work on the ratification debates because it gave me a good overview of the scene. She often mentioned specific people and I would use that research thread to see if that character might work or might lead to other characters. I would delve into them further to see if I could find any materials from that person that gave their point of view in their own words as much as possible. I also provided any images (paintings, engravings) or written descriptions of the character so that the game artists could create a sketch.

The most challenging part was finding voices of people who did not leave a written record about their views on the new constitution—characters like Johnny Harris, Mary Brandt, and Priscilla. They ultimately became the most rewarding, though, because when I found some materials we could use, I felt like we were giving them a voice.

Q. What resources did you find most helpful? Any that might be great for teachers to know about?

Yes, I would point to the Center for the Study of the American Constitution (CSAC) from the University of Wisconsin-Madison, especially the Document Collections. Since the amount of material is so overwhelming, I think teachers would appreciate how CSAC brakes down some of the key issues, as well as their Ratification at a Glance for a state-by-state perspective.

For a narrative view of the ratification, I really liked Maier’s work in her book Ratification: The People Debate the Constitution, 1787-1788. Even though we know how the story ends, it was still an engaging read.

Q. What was it like to see your research turn into a game?

I loved seeing the research I provided get “translated” into scripts that worked for the game and student audience. It was so fun to see the characters come to life—sometimes I would receive new sketches without the name of the character attached and it was fun to see that I could match individuals up with their sketches...it was like the artists and designers were reading my mind.

Jennifer also managed our fantastic advisory panel—engaging them on historical issues from her research, as well as the eventual playtest of the game and deeper content reviews. The advisors were invaluable in the process—especially for the more challenging characters. They helped point us to sources we had not initially considered and provided great insight into how to frame complex issues and remain true to the characters.

With all of this great research at her disposal, our Director of Digital Learning, Carrie Ray-Hill, conjured up fun conversations that would help players navigate what we now know to be the Ratification Debate. Concerns over the powers of the executive became real grudges against monarchy, new plans regarding taxation hit people’s pocketbooks, and hopes for an improved nation drove the passions of local politicians.

We hope this little peek behind the scenes got you excited to play Race to Ratify with your students this Constitution Day on September 17 and inspire them to seek out some historical research of their own.

Many thanks to our Advisory Panel for Race to Ratify: