Let’s start with a story. A little over three years ago, a 4-months pregnant Emma received an enthusiastic email from a lovely and accomplished game designer in São Paulo, Brazil. I was being invited to speak at their 2016 BIG Festival, a convening of independent game designers from all over the world. It sounded great, but being that I was pregnant and it was the height of the Zika crisis, I had to pass. Twelve months later, I received a similar invite. I accepted. Plane tickets were purchased. And being the American that I am, I completely neglected to apply for a visa in time and had to cancel my trip. I figured this lovely game designer and the lovely conference planners would never want to speak to me again. But remember, these people are lovely and apparently very forgiving. Twelve months later, I received the invite again and promptly applied for my visa.

Despite a red-eye flight and no luggage, I hit the ground in São Paulo, Brazil with a smile on my face, mostly because I had a great excuse to go shopping. Also, June is winter in Brazil, so the weather was an amazing respite from the Florida heat I left behind.

But retail therapy and mild temperatures aside, I was genuinely happy to be in this amazing country and amongst such innovative people. The first person I met was Joel from HTC. We shared an Uber after missing our shuttle because we were trying to sort out our luggage issues (I’m telling you, things kept going wrong, and I just didn’t care). He told me all about the work he is doing in immersive education, and I was captivated. And that’s where the best story of my time in Brazil really begins. The story of Emma falling in love with the potential for virtual reality to transform civic education. 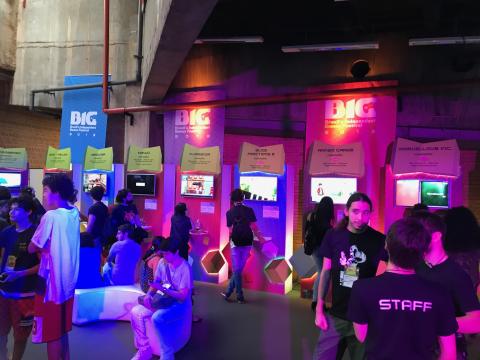 When I arrived in Brazil, VR was the furthest thing from my professional mind. I’m no Luddite, but it seemed to me that VR is still too new and too niche and too not very likely to be making its way into mainstream classrooms. I still think all of those challenges are partially true, but not nearly enough to persuade me that VR is a bucket we should kick down the road. On the contrary, I want to pick it up and fill it with the most engaging civic experiences possibles. 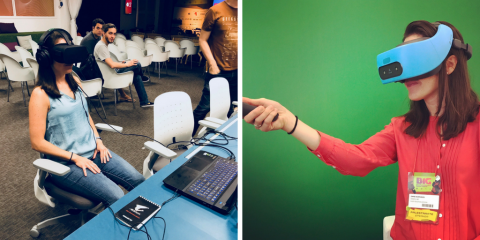 In addition to Joel from HTC, I spoke to Shawn from Schell games. They received a planning grant to make a prototype called HistoryMakerVR. It’s a really neat idea, and a really promising prototype, so I can’t wait to see where it goes next!

Since returning home, I’ve done a few things. For starters, I played Beat Saber on my brother-in-laws’ in-home VR system. I had an absolute blast, even though I was pretty terrible at it. He also had me do this deep sea experience called TheBlu, which pretty much blew my mind (pun intended) and brought me back to my childhood dream of being a marine biologist. Together, these experiences reaffirmed my excitement. I mean, I never stopped smiling the entire time I had that headset on. We have got to get this technology into more schools.

Another thing I did was explore some current VR experiences for social studies education and spoke to some folks who are working in this space. We are definitely early in this journey, but the potential is easy to see and the energy is growing.

And I was delighted to see that iCivics’ longtime game development partner, Filament Games, is entering the VR/AR space with their newly released Breaking Boundaries in Science experience—”an interactive virtual reality celebration of some of history’s most influential women scientists.”

So how do we convert others to invest in VR in K12 education right now? It depends on the nature of their aversion, but assuming they’re against it for all of the reasons, here is my step-by-step strategy:

Dr. Emma Humphries joined iCivics as Chief Education Officer in February 2016. She began her career in education as a classroom teacher in north Florida where she taught all levels of American government, American history, and economics. Follow her: @GatorCitizen