Advocacy for Civic Education: A Statistical Cry For Help

We’ve all seen the statistics…The Nation’s Report Card (NAEP) has consistently revealed that students, K-12, are not proficient in civics and government.  As of 2006, only 27% of 12th graders were proficient in civics and government.  The statistics for adults don’t get any better.  A study conducted by the American Bar Association (2005) revealed that less than half of American adults could identify the three branches of government and only 57% could identify even one Supreme Court justice even though two-thirds of Americans could name an American Idol judge.  This also plays out on Jay Leno’s “jaywalking,” segment in which Leno quizzes random participants about basic aspects of civics and government.  Time and time again the participants fail to answer these basic questions. 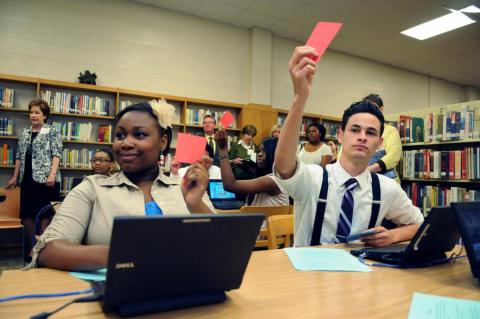 As Justice Sandra Day O’Connor states, “the habits of civic education must be learned.” Civic education cannot just be seen as knowledge of basic facts about civics and government.  It must go far beyond that into habits of civic education.  These habits, or dispositions, form the very foundation of citizenship and as Justice O’Connor states, they must be intentionally taught.  Learning these habits is not innate and cannot exist within the isolation of a single government class.  However, it is only through learning these habits that we will truly embrace the ideals of civic education and the original “civic mission of schools.”  The foundation of our democracy rests upon it.

Stefanie Wager (@srwteacher) currently serves as the Social Studies Consultant for the Iowa Department of Education.  She has taught middle and high school for Des Moines Public Schools and Dallas Center-Grimes Schools in all areas of social studies.

Enjoy this read? Check out:

Civic Education: The need is great, and so is the desire to help (Clifton Barnes)