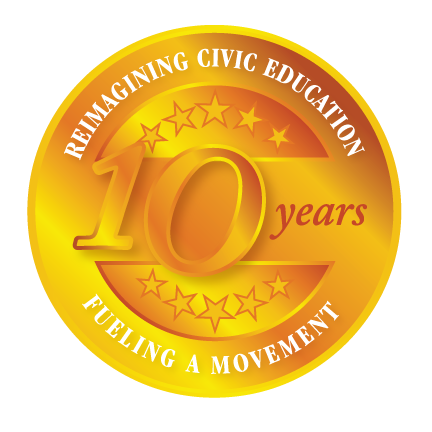 In 1981, our founder, Justice Sandra Day O’Connor, broke the glass ceiling for women when she was nominated to the U.S. Supreme Court. Serving for more than 24 years, her career exemplified a strong dedication to public service. However, breaking the glass ceiling in our nation’s highest court was not the sole hallmark for which Justice O’Connor wanted to be remembered.

Justice O’Connor recognized a growing lack of public understanding about the basic functions of the U.S. government. When she retired in 2006, she made a commitment to finding a way to spark greater civic participation amongst America’s youth. By partnering with educators and industry experts, she discerned that digital, interactive games would be effective in preparing students for civic engagement.

It was then that Justice O’Connor’s enduring legacy, iCivics, was born.

For ten years, Justice O’Connor’s vision has remained the core of iCivics. We are the nation’s largest provider of civic education curriculum. This year alone, our 20 games have been played close to 19 million times by an estimated 6.25 million students from all 50 states. We have developed a wide range of free digital classroom resources adapted to students of all backgrounds and grade levels. Each of these resources is designed to be accessible, relevant, and show students how they can create positive change by participating in their communities and government.

We have been honored to receive numerous awards and honors that showcase our high quality. Our products have been validated by strong evidence from independent researchers from leading universities, who attest that our products have tangible impact. Our desire to constantly improve and innovate has helped us adapt to the ever-changing demographics and needs of today’s classrooms.

Beyond teaching resources, Justice O’Connor called for a movement that would unite citizens of all ages in an effort to make civic education and engagement a national priority.

Today, only nine states require a full year of civic education in high school, 31 states only require civics for one semester, and 10 states don’t have any civics course requirements at all. Studies indicate that civic education is urgently needed, as nearly 75% of Americans cannot name all three branches of government. Only 1 in 4 students reach a “proficient” score in civics on the National Assessment of Educational Progress, and the scores of Black and Latinx students continue to highlight the deep equity challenges in the field.

To address these concerns, we established CivXNow, a bipartisan coalition that has nearly 100 members from across the U.S. The coalition’s goal is to ensure that the civic mission of schools is at the core of our education system, and acts as a vehicle to sustain our unique American democracy. CivXNow has grown at an impressive rate since its inception and what we have already achieved is proof of our momentum. Our latest publication is a set of ten recommendations to guide state legislators as they craft policies to prioritize civic education in K-12 schools. We are energized for the future as the coalition continues to gain traction and work collaboratively towards our common goal.

As Justice O’Connor said, “It is time for new leaders to make civic learning and civic engagement a reality for all. It is my great hope that our nation will commit to educating our youth about civics, and to helping young people understand their crucial role as informed, active citizens in our nation.”

After ten years of hard work, iCivics is at the forefront of ensuring civic education is a reality for future generations, both inside and outside of the classroom. Our achievements are a direct result of the deep commitment to Justice O’Connor’s vision from our teachers, staff, Governing and Advisory Boards, and generous supporters. It is this steadfast dedication that fuels our momentum.