10 Years: iCivics Then And Now, a Teacher Perspective 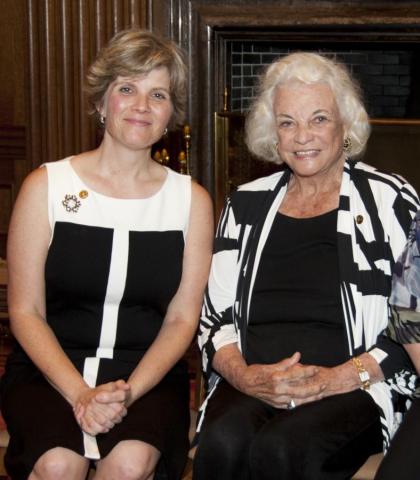 iCivics is ten years old, and I am excited to be a part of the iCivics Educator Network at this significant moment for the organization. I remember the first lesson I used from iCivics, which was Judicial Branch in a Flash. I was searching for material to use in my 7th grade civics classes, and I was immediately attracted to iCivics’ lesson plans, because they were practical and concise. After using my first lesson, I immediately subscribed to their emails because I wanted to know when new material would be available — and as more plans became available — I found that they were just what I needed to give pizzazz to teaching the branches of government.

Since they were founded in 2009, iCivics’ lesson plans have grown tenfold and consistently adapted to the needs of teachers. Classroom material is organized by curriculum unit and by state standards. Through the years, the curriculum team has revised and improved existing lessons, as well as created and adapted plans for high school classrooms and English as a Second Language (ESL). They have added lessons on the historical influences of the U.S. government and created supplemental materials for AP U.S. Government and Politics. There is always something new — as I was looking through the state standards, I found a new lesson that I had not seen before, A Trip Around the World, which is a perfect addition to my unit on human rights. The team at iCivics knew that social studies teachers needed help teaching literacy and writing, so they created Drafting Board in 2012. Later they offered DBQuest, giving students the ability to dig deep into primary documents to answer authentic questions.

The first games my students played were Executive Command, Supreme Decision, and Do I Have a Right?. Now there are 20 games that cover the functions of all the branches, state and local government, diplomacy, and even media literacy. The games have always been an approachable way to connect students to the content. I find that the games are a great way to “re-teach” what some students may have missed in classes, as well as provide enrichment for students who have mastered the concepts. When students finish work early, they ask, “Can we get on iCivics?” This past school year, I had a group of young men who worked diligently to finish classwork early in order to play Crisis of Nations. As their expertise grew, they asked if they could contact iCivics and recommend a few changes to improve game play. I said, “of course,” because I knew the game developers would appreciate the students’ viewpoint and would use that information for future updates.

The iCivics team also depends on the feedback from their Educator Network to fine-tune their work. This has helped them develop games and content that are relevant and ready for the classroom. When I became a part of the Educator Network in 2011 and began presenting iCivics at regional trainings, it was a new, never-heard-of resource. Today, when I speak with other civics educators, iCivics is “the authority” and first resource for teaching civics. iCivics was created with the mission to improve civic education. I remember the first time I heard Justice Sandra Day O’Connor speak about her passion for civic education. She said, “You may be surprised that I’m promoting civics teaching and learning using online media. I’m not an expert in it, but these are the new tools in civic engagement for the digital generation...we need to use these tools to educate if we’re going to inspire an interest in today’s young people to become active and knowledgeable civic leaders.”

I believe that you can see iCivics’ far-reaching impact on today’s youth. In 2018, when the Parkland, Florida school shooting happened, adults around me were amazed that these students were so articulate and civic-minded. However, this was not surprising to me.  These students knew what to do because they were taught what to do. In 2011, the Florida Legislature passed the Justice Sandra Day O’Connor Civics Education Act, which mandated a middle school civics course. In the years since, hundreds of civics teachers in Florida have turned to iCivics for engaging and effective learning resources. So the students at Marjory Stoneman Douglas, along with their peers across the state, had participated in well-structured, research-based, highly engaging civics learning. To me, they were the epitome of Justice O’Connor’s vision of active, knowledgeable leaders in their community.

Partnerships with iCivics have grown throughout the years. For example, CivXNow is an outgrowth with the goal of raising awareness of the needs surrounding civics education, and it provides an opportunity for stakeholders and policy makers to work together toward the common goal of “preparing our youth to assume the responsibilities and understand their rights as active participants in the civic life of this great nation.”  Only an organization with a reputation like iCivics could so quickly recruit 100 like-minded organizations to help achieve its vision for civic education in America.

iCivics has been a driving force for today’s students and young adults—helping them understand their government and fostering a civic mindset. I’m not sure what the next ten years hold, but I do know that iCivics will be listening, learning, and adapting to help equip today’s students to participate in our society.

Written By Leigh Stovall
Leigh teaches 7th Grade Civics and Geography in Trussville, Alabama. She has been a member of the iCivics Educator Network since 2011.

The views expressed in this blog reflect the views of the author alone and do not reflect the views of iCivics. iCivics does not endorse, verify or represent the accuracy, completeness or reliability of any opinion, statement, recommendation or other information written by a third party and published on the iCivics blog