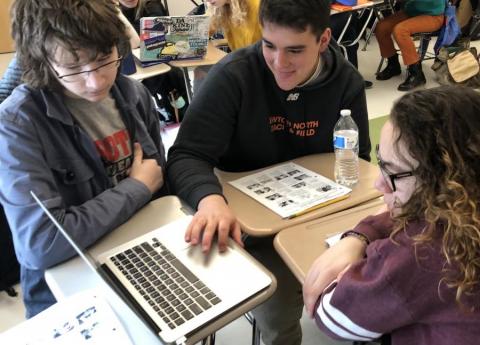 Experiential, game-based learning is a fun and engaging way for students to learn. With games, they get to “be” a Supreme Court Justice, the president, a town councilperson… Rather than reading about something in a book and memorizing it, students get to participate which allows them to understand the concepts better. This works for social studies classes, but what about Spanish class?

Our ELL Project Lead, Kristen Chapron, was able to visit Ana Tellado-Schiff’s Spanish 4 classes at Newton North High School in Massachusetts. The class was studying human rights and the Declaración Universal de los Derechos Humanos (The Univeral Declaration of Human Rights) - ENGLISH and SPANISH versions. And, guess what, iCivics has a game for that! Do I Have A Right? or ¿Tengo algún derecho?, is the first game that iCivics translated into Spanish.

“I was able to walk around Ms. Tellado-Schiff’s class and observe the students playing in groups of three. It was wonderful to hear them all discussing the game in Spanish and figuring out which right applied to each case. Best of all, they were having fun. The time flew by!”, said Kristen.

Ms. Tellado-Schiff said, “I enjoyed watching my Spanish 4 students playing "Do I have a right?" in Spanish.  They were thinking and trying to decode the language to make decisions about their "clients".  Students were able to make connections with the class curriculum and were engaged in active reading. To see them smiling as they read the articles that pop up at the end of each "day" was priceless.  The students were drawn to the personalization features available in the game.  And the best part of it all is they were learning while playing.  They were learning language and learning human rights content simultaneously.”

After playing, the students shared their experiences. Here’s what students had to say about their play experience:

“The iCivics game was really fun and interesting because we needed to think very quickly IN SPANISH and the context was good. I liked the game and I would like to play it again.”

“The game is really fun and great for Spanish level 4. It gave us the opportunity to see how the same right applies in many different situations.”

“I really liked the game. It was a lot of fun, and I found myself talking in Spanish a lot more, and more fluently than I expected.”

“I liked the game we played in class. It was good because it added pressure to our Spanish speaking and gave it more context than just “What did you do yesterday?” It was fun to play but it was challenging, which was good.”

“The game was really fun and I think it was just the right level for us and I would like to play this game again. I learned more about the rights while playing this game and it keeps us thinking while more people come in. I also liked how people leave when it took too long because it’s really realistic.”

Ms. Tellado-Schiff added that it was a treat to discover this game in Spanish mode since it's rare to find games that require higher order thinking in the target language. iCivics now has two Spanish-language games available (¿Tengo algún derecho? and Nación de inmigración (Immigration Nation) and we plan to have more in the future. ¿A qué esperas? What are you waiting for? ¡Vamos a jugar! Let’s play!